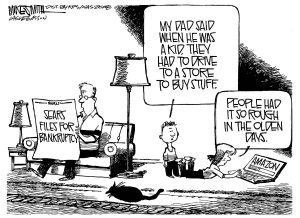 It’s doubtful that a former American presidential candidate has ever formally endorsed incivility before, but Hillary Clinton is ever full of surprises. In an interview on CNN, the erstwhile advocate of “if they go low, we go high” switched around to unapologetically call for going low.

“You cannot be civil with a political party,” she explained, “that wants to destroy what you stand for, what you care about.” She added that if Democrats retake a house of Congress, well, then, “that’s when civility can start again.”

Clinton’s statement is yet more confirmation of the radical mood of the current Democratic Party, not just in blessing tactics that once would have been anathema to the mainstream, but questioning the legitimacy of core elements of our system. The party’s base is just a few steps from beginning to give up on our common national life.

Civility is a rather fundamental thing to throw under the bus. It is the basis of our political life, assuring that disagreements are settled within certain bounds and don’t escalate into blood feuds.

This doesn’t mean that there can’t be intense arguments, harsh condemnations, passionate controversies and partisan donnybrooks. These are all endemic to a free society and very healthy things. It does mean that there are certain widely accepted guardrails.

In the Brett Kavanaugh debate, the normal pressure points of the democratic process (rallies and demonstrations, phone calls to congressional offices, online, print and TV advocacy) were deemed insufficient — senators had to be berated in the hallways, chased out of restaurants and harassed at their homes.

Asked on CNN if the actions against her fellow senators went too far, Mazie Hirono stood by the harassment: “I think it just means that there are a lot of people who are very, very much motivated about what’s going on.”

But when you angrily confront someone, especially as part of a group, it carries an inescapable whiff of physical intimidation. When you shout Ted and Heidi Cruz out of a Washington restaurant, you aren’t trying to convince them of anything, you are merely abusing them. When you yell at Senate hearings and floor votes, you aren’t influencing the process, but disrupting it.

Our system of government is increasingly held in low regard on the left. The 2016 election was somehow stolen, and the mechanism that gave Trump his victory, the Electoral College, is illegitimate. The Senate, which confirmed Kavanaugh and gives small, red states the same representation as large, blue states, is also illegitimate. Finally, the Supreme Court, now home to two Trump-appointed justices, is illegitimate as well.

That’s a lot of illegitimacy, all stemming from one lost presidential election. Imagine if Democrats lose another? The fact is that if you believe an institution is legitimate only if you control it or it works in your favor, you never truly believed in its legitimacy to begin with.

Perhaps the Democratic fever will pass if the party gains some power again, as Clinton suggested in her remarks. But it’s notable enough that one of our major parties is showing signs of contemplating a divorce from our system as it currently exists.

—Civility Is for Suckers–