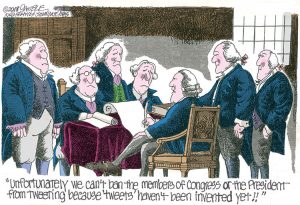 Don’t you just love doublespeak, which “deliberately obscures, disguises, distorts or reverses the meaning of words,” according to the dictionary? It’s the distorted language of grievance that allows society’s oppressors to wallow absurdly in their contrived victimhood.

One of my favorites is a phrase used against anybody who dares oppose the nation’s plutocrats, these obese cats who routinely use a small part of their ill-gotten gains to buy candidates — oh, I’m sorry, I mean “make campaign contributions to elect officials who will return the favors by twisting the laws to protect the prosperous from prosecution for thievery.”

What happens when anybody utters even a mild criticism? They all shriek “CLASS WARFARE” at the top of their lungs. That distortion is effective in a nation that prides itself on its alleged economic opportunity, even though just a cursory look will reveal that is actually just a myth; what we really have is gross financial inequality, with most of the country’s abundance held in the vaults of those at the tippy-top of the heap. In reality, they wage class warfare against everyone else.

That’s right up there with “playing the race card,” the favorite of those who play the race card constantly, holding on to that grand American tradition of white bigotry against people of color. That doesn’t stop white bigots from feeling set upon by every effort, no matter how puny, to counter the nation’s built-in prejudice. Affirmative action becomes “reverse discrimination,” even though it has had limited success in correcting the severe disparities that still exist.

But don’t worry, white supremacists, help is on the way: Anthony Kennedy, who spent 30 years as a Supreme Court associate justice, is retiring. Kennedy has been an independent-minded conservative who had reluctantly supported such concepts as affirmative action and gay rights. Without a doubt, President Donald Trump’s nominee to replace him will be someone far to the right. Really far to the right. Goodbye, civil rights; goodbye, sexual freedom.

At top of the chutzpah hit parade is the complaint by Trump supporters that opponents are forgetting their manners, suddenly lacking in civility. Trump supporters complaining about incivility? Their leader invented that game. His combination of lying, name-calling, bigotry and misogyny has turned every debate about issues into an attack not just on civility, but on civilization.

All this hypocrisy has been inspired by the recent experience of administration luminaries who have been trying to eat out. The most famous incident involves Sarah Huckabee Sanders, the Trump press secretary. By now we all are well aware that the owner and staff of a Lexington, Virginia, restaurant were so offended by her role in the Trump administration that they asked her to leave, which set off outrage in Trumpsters everywhere.

I have a simple solution: Set up separate dining rooms for Trump supporters and their adversaries. In Mexican restaurants, to avoid food fights, put up a wall. Problem solved. (It will be funded by Mexico, of course.)

What is nowhere near being solved is the constant doublespeak, the language of hypocrisy. Over time, the incessant use of such semantic dishonesty has dissolved the trust necessary to make a democracy function. Maybe that’s why ours is not functioning so well anymore.