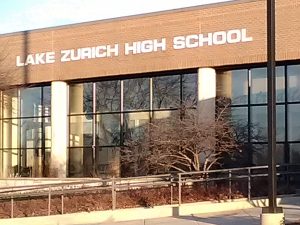 The issue came to light, after a team dinner in late October, and a staff member alerted the school’s board of a hazing incident.

A civil lawsuit seeking monetary damages and “injunctive relief to end hazing rituals” has been filed against the Lake Zurich Community Unit School District 95, three coaches, two district officials, and unnamed athletic support personnel, on behalf of two students from the 2016 varsity football team and their parents, following a Feb. 1 press conference, which was used to announce its filing that day.

Attorney Anthony Romanucci, of the Chicago-based firm of Romanucci and Blandin LLC, representing the plaintiffs, said the complaint addresses a culture of hazing, “dating back to 1998,” with “Lord of the Flies-type” tactics to coerce and intimidate silence from the participants, and their victims.

“They (the students) were brutally mocked, humiliated, embarrassed and emotionally harmed … all in the name of team bonding,” the suit alleges.

The filing in the United States District Court for the Northern District of Illinois, requests a trial by jury although no hearing date has been allotted.

Most damaging in the lawsuit are numerous allegations of sexual assault and sexual abuse performed upon, and by, members of various athletic teams at the high school. The enumerated charges included forced oral sex, sodomy, urination on players, and “Duct-taping” team players naked to posts. In some cases, coaches were alleged to be involved in a hazing ritual of beating the team member physically, “on a run.”

The issue came to light, after a team dinner in late October, and a staff member alerted the school’s board of a hazing incident. The team was to play Fenwick in the IHSA Class 7A playoffs Nov. 5, and rather than forfeit, the district allowed the game to be played while head football coach David Profitt and assistant coach Chad Beaver, were placed on paid administrative leave.

An investigation involving the Lake Zurich High School varsity football team was “suspended” by the village’s Public Safety Department, with the Dec. 2 announcement of no criminal charges pending. Lake County State’s Attorney Michael Nerheim’s office was forwarded the materials, and they have not moved on charges either.

At the time, Village Police Chief Steve Husak had said the investigation lacked someone coming forward to press criminal charges, and that criminal charges could not be supported because of that aspect.

He also said the state’s attorney’s Juvenile Advocacy Division had helped oversee procedural work on questions to ask, as his department completed the field work. There was also a resistance in forthcoming answers from those people interviewed.

“The court filing omitted some of the more specific details of the alleged assaults, as a matter of protection and privacy for the individuals.”

The lawsuit names the two coaches as defendants, along with Rolando Vasquez, the former athletic director, district superintendent Kaine Osburns, William Stutzman, a coach, along with 10 other “John Doe” coaches. The underlying concern, as per the lawsuit, is the pervasive nature of “turning a blind eye” to the hazing incidents, the adults in a position of responsibility did not stop the alleged occurrences, nor did they report these occurrences to the state of Illinois under the Abused and Neglected Child Report Act, as a component of their state licensure.

Since December, Profitt, Beaver and Vasquez have announced resignation requests. The school principal, Kent Nightlinger, announced his retirement at a Dist. 95 board meeting Dec. 15, with an effective date at the close of the 2016-17 academic year, in the spring.

The last public statement was a Nov. 10 newsletter, signed by Nightlinger, and Osburn, stating that remedial actions were made promptly to the allegations with the district’s own “full” investigation, and that any punitive measures would be done in accordance with district policies and codes. It also said, in part: “We will not release specific information about student behavior or discipline, and nor will we confirm or deny any asserted ‘facts’ … rumors often run rampant and are not always truthful.”

Requests for comment from Jean Malek, District 95’s communications director, were not returned.

An email correspondence contained a Feb. 1 district press release: “Earlier this morning, a personal injury attorney held a press conference in Chicago announcing he has filed a civil lawsuit on behalf of two individuals in relation to hazing on the Lake Zurich High School football team.

“Standard protocol is that the district will not comment publicly on pending litigation. The district is committed to creating a positive culture that does not tolerate hazing of any kind. Our focus will be looking forward. Our own attorney has conducted an internal investigation and made 13 recommendations regarding how we can address hazing proactively and implementation of these recommendations has already started.  Additionally, the administration has instituted other measures not outlined in the report.”

In a statement from Romanucci’s office, “A probe into the hazing allegations began when football players were ordered to sign a student behavior agreement before the team’s Nov. 5 playoff game against Fenwick High School, or be prohibited from playing the rest of the 2016 season. The agreement was part of a letter sent to players and parents outlining ‘widespread and egregious abuse’ that had been taking place.

“This letter alone verifies that the Lake Zurich coaches and administration were well aware that inappropriate behavior was taking place in the locker room, which is extremely concerning.”