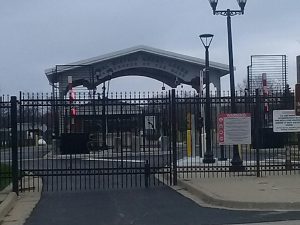 An early morning raid by Federal Bureau of Investigation officers April 12 resulted in the arrest of two Zion residents, Joseph D. Jones and Edward Schimenti, on charges of providing material support to a terrorist organization.

They were arraigned briefly later that day in a Chicago district federal courtroom before Magistrate Judge David Weisman, and both men acknowledged that they understood the charges.

The 70-plus page criminal complaint outlined evidence gathered by the bureau since September 2015, and included individual photos of the pair in face-covered garb with Islamic State flags in front of the Illinois Beach State Park entrance sign at the intersection of Wadsworth and Sheridan Roads. Agency officials became aware of both men through postings on both men’s Google Plus profile pages, alleging empathy for ISIS jihadist causes with inflammatory propaganda.

The arrest came after the pair had driven an FBI informant, whom they believed to be a supporter of Islamic causes, to O’Hare International Airport in Chicago April 7 where he would take cellphones purchased by the pair in Syria. The phones were to be used as detonation tools in improvised explosive devices. The complaint also indicates a statement made by Schmenti last month, to make the Great Lakes Naval Training Center a target for domestic terrorists.

The informant worked out with the pair at a local gym, and had led them to believe he was a conduit to an ISIS network that could smuggle new recruits overseas for the effort, according to the complaint. They were to continue providing cellphones through the contact’s “aunt.” They also showed him video footage from various websites depicting beheadings, torture, and the burning of captured soldiers.

Jones’ profile page also contained a video, “Some Of The Deadly Stabbing Ways: Do Not Forget To Poison The Knife.” Schimenti, referred to himself as Abdul Wali in the profile, and was employed by the Zion-based Cancer Centers of America. Jones is a college student and chef. If convicted, both individuals could face 20 years in federal prison.

Local reaction has ranged the gamut that both 35-year old men would engage in such activities. However, Schimenti was evidently involved in local politics at the community level. An April 2015 protest rally against the now-questioned self-defense shooting of Justus Howell, 17, by a Zion police officer, was organized partly by Schimenti.

A portion of his rhetoric, prior to the event, which stepped off from the intersection where Howell was found mortally wounded, contained calls for the Zion police station to be bombed, or blown up.

“He helped to organize the rally that afternoon, and people took turns expressing their grief and outrage in speaking through a bullhorn to the crowd,” said Clyde McLemore, founder of the Lake County chapter for the national black Lives Matter movement. “When he took his turn to speak, he started making radical statements. We had to take the microphone away from him.

“We told him that we don’t do that, it’s not what the movement and the purpose of the rally was about. Black Lives Matter is about peace, and generating understanding … we had to disassociate ourselves from him because of that.”