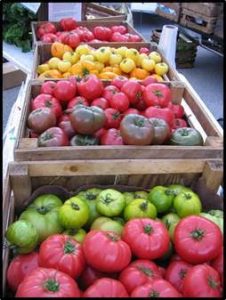 Most gardeners trellis their tomatoes at planting, or shortly after. Trellising a half-grown tomato is an impossible task without damaging the plant.

Give a little time and attention to managing water, nutrition, and airflow, and you will have an ample harvest of garden tomatoes.

One of the most common issues for home gardeners is blossom end rot, a black patch on the bottom (blossom-side) of your fruit, caused by a localized calcium deficiency when your plant gets thirsty—the nutrients are not making it all the way through the fruit when there is not enough water to move them.

Water your tomatoes at least one and a half inches per week, and mulch or mound at the base to conserve water. Inconsistent watering can also cause the tomatoes to crack when they are ripening.

Although tomatoes are heavy feeders, it is best not to over-fertilize as too much nitrogen can decrease yield, damage roots (especially if under-watered), and cause excessive vegetative (green) growth.

Use a starter fertilizer at the time of planting even if you have amended with compost. A starter fertilizer contains low amounts of nutrients, ideally with a ratio of nitrogen-phosphorus-potassium (often referred to as N-P-K) under 10.

In the beginning, nutrient requirements are low for tomato plants. As they grow the requirements rise, but then drop down again once fruit has become full size. Use one tablespoon of ammonium sulfur fertilizer per plant when tomatoes are the size of a golf ball. Follow up with a 10-10-10 fertilizer application every four weeks after that.

As you peruse tomato varieties to grow this season, one of the first questions you should ask is “Are these determinate or indeterminate plants?” Each requires different strategies for managing airflow.

Determinate (bush) varieties produce their fruits on the growing tips, causing the branch to stop production once the fruit has set. They are most often used for container gardening or small spaces and generally do not need to be trellised or staked. Examples of determinate varieties: Roma, the Mountain series, and Cherry Gold.

Indeterminate plants produce their fruits on side branches off the main vine and are able to produce fruit all summer and fall until they die off at the first frost. They can grow between six and twelve feet tall and require trellising or staking.

They generally taste better than determinate tomatoes because of the foliage to fruit ratio. Some of the most popular varieties, including heirlooms, are indeterminate types, such as Brandywine, Cherokee Purple, and Sweet 100.

For indeterminate varieties, it is essential to trellis in order to increase airflow around the plant, which reduces foliage diseases, and to keep the foliage and fruits off the soil. There is nothing more disappointing than a gorgeous tomato eaten up or rotting because it has been lying on the ground. An upright plant also makes it easier to spot pests.

Most gardeners trellis their tomatoes at planting, or shortly after. Trellising a half-grown tomato is an impossible task without damaging the plant.

Basic tomato cages found at any big box store or garden center are the simplest, most popular, and most affordable method of trellising. However, these tend to topple over once the plant grows large, and they do not fare well against Illinois winds. These are more effective with smaller determinate varieties but are insufficient for indeterminate tomatoes.

A second method of trellising tomatoes is homemade wire cages; home gardeners and small scale farmers construct these out of four-foot tall rolls of wire mesh, stacked and zip-tied double high to create a six- to eight-foot tall column.

The mesh should have 4- to 6-inch openings for easy harvesting. The cages must be reinforced with at least one t-post, at least six-foot-tall, and set in the ground at least six inches deep.

This is the method used by Bill Davison, Local Food System and Small Farms Educator because most of the work is done at the beginning of the season, but the method does require more upfront cost the first year.

A third method, the Florida weave or basket weave, creates a hedge of tomatoes. This method costs less than wire mesh trellising, using less than half as many t-posts, but does require more labor throughout the growing season.

One t-post is placed at the beginning of each row and after every third tomato plant. Tightly secure twine to the post at the end of the row, one foot from the ground. Jute is recyclable and breaks down over time; polypropylene is stronger and more durable season-to-season; we prefer the latter.

Snake the twine between the plants, pulling tight around the next t-post and securing it with a handful of wraps, before returning, snaking on the opposite side of each plant to secure it between the sections of twine. Additional rows of twine are added every eight inches as the vine grows taller.

All growth should be removed from the bottom 12 inches of the plant once the second row of twine is added. When the plants reach the row at the top of the t-posts, they can be pruned back for height.

If you would like to learn more about tomato trellising, look for posted pictures of progress throughout the season at facebook.com/MidIllinoisMasterGardener and visit us at our website at go.illinois.edu/LMW.

For more information on this program or additional Extension programming, please contact us at your local Extension office at 309- 663-8306.