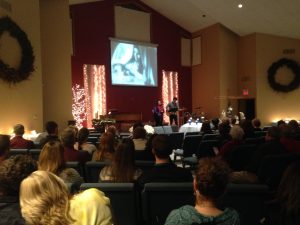 Eighteen months ago, pastors Lisa and Bill Orris, never dreamed they would personally face the Christmas season as “not the happiest time of the year.”

In August 2015, a Huntley teenager drove his car through the nursery and into the sanctuary of Hope Church, 451 Ackman Road in Crystal Lake.

Although no one was hurt, the church needed extensive repairs. Little did the Orrises know, the loss of property was only the beginning.

A week later, The Orrises’ son was killed in a motorcycle crash. By December, the couple found they struggled to be joyful amidst all the holiday bustle and cheery caroling. That’s when the Rev. Lisa Orris organized Blue Christmas. 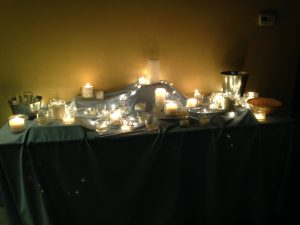 “It’s a peaceful service for those who struggle to find joy in this season of expectations of joy, an attempt to minister to people in their pain, while at the same time acknowledging the reason for Jesus’ coming into the world is to bring comfort and hope,” said Lisa Orris.

Blue Christmas is intended to help people find joy and hope for the future amid their pain. The service, which was held for the second year on Sunday, includes a “litany of complaint” gathered from the Book of Psalms, reminding attendees that even faithful people cry out in pain to their God. The service also includes sharing, sermons, and music designed to acknowledge the grief that many people carry during the holiday season, and to remind them of the hope that the future promises.

“It’s a peaceful service for those who struggle to find joy in this season of expectations of joy, an attempt to minister to people in their pain, while at the same time acknowledging the reason for Jesus’ coming into the world is to bring comfort and hope,” said Lisa Orris.

Founded in 1979, Hope Church has been at the Ackerman location since 1992. Lisa and Bill Orris began their ministry at Hope in 2012. Hope Church, part of the Evangelical Covenant Church, is a multiethnic denomination in the United States and Canada with ministries on five continents of the world. The Evangelical Covenant Church was founded by Swedish Lutheran immigrants in 1885 in Chicago, Illinois.

Lisa Orris wishes to remind people that “Lament is one of the most common forms of prayers in the Old Testament. Somehow we have gotten the notion that the hard emotions such as pain, suffering, anger, doubt, anxiousness, frustration, or confusion are not acceptable to God. It is simply not true. God is interested in every part of our lives especially the painful parts.”

The Blue Christmas service is scheduled each year on the Sunday closest to the Winter Solstice Dec. 21. The Winter Solstice marks the darkest day of the year followed by a gradual lengthening of daylight until the Summer Solstice.

Lisa Orris said that she picked the Winter Solstice with intention, “We acknowledge our darkness and loss, but have hope for healing, just as the days become lighter after Dec. 21.”