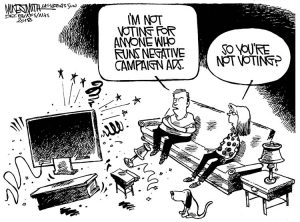 It happens several times a game: I’ll announce to the world, “The entire season rests on this pitch (shot/play/whatever).” My friends long ago learned simply to ignore my sarcasm, which makes it difficult when I’m being serious. Such as when I announce, “The fate of the nation might rest on the upcoming election.”

For real. Even though Donald Trump is not on the ballot, the midterms will determine if Congress can take a role in restraining his worst impulses. It should be obvious to those horrified by his presidency that they must install an effective opposition, which is to say a Democratic majority not only in the House of Representatives, but also in the Senate. That can happen only if all those millions of people who claim to be part of a “resistance” show up at the polling places in massive numbers, turnout that will overwhelm those in Trump’s so-called base who will show up inspired by his message of hate and ignorance, and his constant stream of outright lies.

That is a big “if.” It’s always a challenge to Democratic Party leadership to get those on the left to find common ground with those in the middle, particularly when that leadership is nonexistent. Turnout for midterm elections is low anyway, but it will be high for those who are passionately pro-gun and anti-immigrant, meaning the pro-Trump millions. A large portion of the anti-Trump crowd is really just insipid about most everything, except maybe their anti-Donald feelings.

In addition, those who are center and left are afflicted by a sense of fair play. That has never concerned those on the right. The fact of the matter is, in politics, as legendary pro football coach Vince Lombardi said, “Winning isn’t everything, it’s the only thing.” You can’t deliver a knockout in a slugfest if you’re wringing your hands at whatever the other side is doing. And the Trumpsters are always doing something abusive.

With all that, Democrats are in for a brawl. Every time they hear someone predict that victory for control of the House is assured, their leaders, whomever they are, should cringe. Such cockiness breeds lethargy, which becomes a feeling that it’s not all that important to stand in line at the polling places.

Besides, taking back the House is not enough. The Democrats really need the Senate, too, and that’s an uphill battle. Under Mitch McConnell and the Republicans, the United States Senate has merely enabled Donald Trump and pursued conservative goals that favor the wealthy at the expense of everyone else. Besides, it’s only the Senate that can block the federal court system from being taken over by regressive hard-liners. They are ruthless when it comes to packing the judiciary.

If, perchance, the various charges of sexual assault against Brett Kavanaugh are enough to send his nomination down in flames, the Republicans in Trump’s White House will simply name another reactionary. Only a Democratic Senate can advise and deny consent.

Trump is fully aware that a Democratic Congress, with its broad subpoena power, can make his life a living hell. Unless those who oppose Trump all get out and vote, they’ll be forfeiting to this vital election to his team and forfeiting the country.