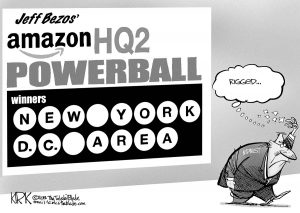 I’m always amazed that the Washington types I consider to be such jerks are completely different when I run into them at a dog park. They’re actually pleasant to be around. Our canine kids certainly are a good influence.

I find it interesting that President Donald Trump and his family don’t have any puppies, not even the ones that most politicians trot out for warm and fuzzy photo ops or campaign ads. But not Trump, maybe because he doesn’t do warm and fuzzy. Or perhaps it’s because he’s a major-league germaphobe and is worried about rabies. Come to think of it, though, given some of the personalities in his administration, that’s probably not it.

There’s some question about whether Harry Truman actually said it or not, but it’s still worth noting: “If you want a friend in Washington, get a dog.” Donald Trump is no Harry Truman, to put it mildly. In addition, he clearly doesn’t care about having friends in Washington, or for that matter, anywhere beyond the rallies where crowds howl their approval nonstop, no matter how he foams at the mouth.

He’s foaming a lot lately, growling constantly about how he can’t control the media packs no matter how he tries to intimidate them. Even pulling a White House pass from that hot dog Jim Acosta didn’t cause Acosta or anybody else to cower. And when he tried his alpha act in Paris, French President Emmanuel Macron, who previously had tried to be friendly, seemed determined to prove that he is not Trump’s “poodle.”

For those who don’t remember, that was the scornful label attached to British Prime Minister Tony Blair, because he was perceived to support anything President Bill Clinton would do. Not this time around. In fact, Macron seemed to go out of his way to embarrass The Donald, particularly when in front of several world leaders he challenged Trump’s embrace of the loaded term “nationalist.”

“Nationalism is a betrayal of patriotism,” said Macron through a translator. “By saying ‘our interests first, who cares about the others,’ we erase what a nation holds dearest, what gives it life, what makes it great and what is essential: its moral values.”

That was the French president marking his territory, if you get my drift.

So, another trip overseas, another embarrassment. But finally President Trump was safely ensconced in his home kennel. Back in the day, he used to be quite the horndog, at least according to his PR. But these days, instead of sniffing whatevers, he tweets: “The problem is that Emmanuel suffers from a very low Approval Rating in France, 26%, and an unemployment rate of almost 10%. He was just trying to get onto another subject. By the way, there is no country more Nationalist than France, very proud people-and rightfully so!”

Take that, Macron! Now the president can start taking a bite out of the high levels of his administration, dumping all those who have displeased him. We can expect more than two more years of this, as “Bulldog” Trump (many think he looks like one) wavers between snarling and whimpering as he hounds everyone who raises a leg against him.