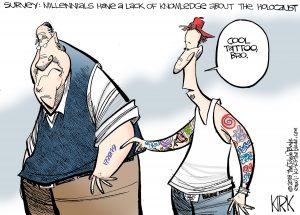 If Republicans aren’t losing their congressional majority this coming fall, they are doing a good job of acting like it.

Dozens of Republicans are leaving the House, and last week Paul Ryan said he is resigning as House speaker at the end of this Congress, and will not even run for his congressional seat again.

If the high-water mark of Republican power came on the day last December that congressional Republicans and President Donald Trump celebrated the passage of the tax bill on the White House lawn, Ryan’s announcement is a clear sign that Republican clout is receding.

“We Were Eight Years in Power: An American Tragedy” is Ta-Nehisi Coates’ lament over what he considers the lost opportunity of the Barack Obama years. The story of unified GOP control of Washington might someday deserve to be written as “We Were Two Years in Power: A Tragicomedy.”

In a gift for the ages, Republicans won all elected branches of the federal government in 2016. But the initial ecstasy over Trump “signing their stuff” has given way to the reality that they don’t have stuff to send him.

Republicans couldn’t roll back Obamacare, in part because the party hadn’t thought through what the Republican alternative was.

They passed a tax cut that included important reforms that even the Democratic repeal bills don’t want to completely undo and that are boosting the economy.

That’s all to the good. But tax cuts aren’t a magic political elixir. First, Trump is right, as he said at an event a couple of weeks ago when he tossed away his script, that they are boring. They don’t have the emotive appeal of issues like trade and immigration. Second, there are limits to how effectively you can run on the one thing you accomplished last year.

This is the truly extraordinary aspect of the current situation. Republicans are content not to do anything else of significance in Congress this year. They passed an omnibus spending bill that was rightly denounced as a disgrace by Trump even as he signed it, and the Senate is working to confirm Trump nominees. That’s pretty much it.

They aren’t trying to wring every last ounce of what could be their waning months of unified control of Washington — for years to come. They aren’t determined to give their voters some other reasons to support them in November. They aren’t attempting to create action in Washington besides Trump’s feuds with James Comey and Stormy Daniels.

Republicans are resting on their laurels, when they don’t deserve any laurels. They are suffering from political exhaustion, when they haven’t truly exerted themselves. They are acting like they are lost in the wilderness, when they still occupy the commanding heights of American politics.

Maybe Republicans somehow hold on to the House this fall (the generic ballot is encouraging lately, if nothing else is). At the very least, though, Republicans are going to lose their functional majority. The question at this juncture is, How would anyone notice?