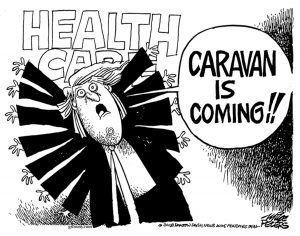 Republicans have always justified their preferential treatment of the super-wealthy by trotting out the bogus “trickle-down theory.” They argue that as the rich get richer, they will spend more on jobs, etc., and the financial benefits will “trickle down” the economic scale. It’s a total con, of course. A sham.

But now we are witnessing a trickle down that’s for real. The man who has taken over the Republicans spews ignorance, hatred and violence every time he opens his mouth or pecks on a smartphone. His malice indeed trickles down — actually, more like a gushing — as Americans for and against him act on and react to the poison of Donald Trump.

It explains the horrifying slaughter at a Pittsburgh synagogue on a recent Saturday — the Shabbat, when Jews would be packed in as they came to worship. Robert Bowers, who allegedly mowed them down, was an outspoken and virulent anti-Semite. It would be overstating it to pin that label on Donald Trump. However, he certainly has pandered to those who are emboldened to crawl out of their dark hiding places and proudly display their fanatic hatred of Jews and everyone else who’s not a heterosexual white Christian. Trump inspires them with his unceasing dog whistles.

By the way, Bowers had made it clear in his social media rants that he was not a Trump supporter. Not so for Cesar Sayoc, the passionate Trumphead arrested for sending out crude pipe bombs to just about any liberal who had ever crossed his idol.

Donald Trump has created a presidency with his brand of destructive politicking that literally triggers violence. The brutality now flows freely from both sides. The 2017 shooting and near killing of House Majority Whip Steve Scalise during an attack on GOP congressmen as they practiced for a baseball game against the Democrats was another case in point. The perpetrator was someone from the left who had become inflamed into a homicidal rage. What also was regrettable is that the annual game is one of the few shreds of bipartisanship that remains.

Trump’s poison cascades downward, and tears us apart. Violence is a predictable result. And now he has the chutzpah to declare that what our country needs is to “unify.” He blames the media. One recent tweet reads: “There is a great anger in our country, caused in part by inaccurate and even fraudulent reporting of the news, the fake news, the true enemy of the people, must stop the open and obvious hostility …”

That is an invitation to violence against journalists if there ever was one. Or perhaps depraved responsibility. Meanwhile, his sycophants on the right are still peddling the story that the entire pipe bomb episode was a “false flag” subterfuge. It was really a “Democratic operative,” thundered Rush Limbaugh to his remaining dozens of radio listeners, “Republicans just don’t do this kind of thing.” How about Trumplicans, Rush?

This quote may be familiar, as I’ve used it before: “‘Cheer up,’ they said. ‘Things could be worse.’ So I did, and sure enough, they were.” Unless we rediscover that political debate means exchanging points of view as opposed to shouting at one another; until our leaders get a twinge of conscience, the growing fire will finally consume our country. The national will to extinguish it will have become a pathetic trickle.