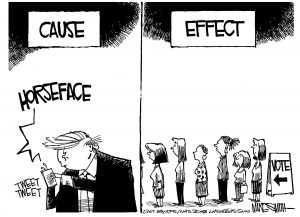 Is the INF Treaty so important that the Russians should be allowed to cheat on it without consequence?

That’s the implication of the criticisms of President Donald Trump for saying that he’s pulling out of the Cold War-era arms-control agreement. Mikhail Gorbachev deemed Trump’s stated intention “unacceptable” and “very irresponsible,” although it isn’t the U.S. that has been flagrantly violating the treaty for years.

The Intermediate-Range Nuclear Forces Treaty, signed in 1987, was a central achievement of the Reagan-Gorbachev diplomacy of the late 1980s. The Soviets had deployed intermediate-range SS-20 missiles that could hit NATO countries from bases in the Soviet Union. The U.S. countered by deploying its own intermediate-range missiles in Europe. At the same time, President Ronald Reagan proposed the “zero option” to eliminate such missiles from the arsenals of both countries. As he sought to save the doomed Soviet system, Gorbachev agreed.

The Russians have recently made obvious their contempt for Gorbachev’s handiwork. The State Department has determined since 2014 that Russia is in violation of the treaty, via the 9M729 ground-launched cruise missile. Tests of the noncompliant missile go back to 2008, and the Obama administration first told Congress of its concerns in 2011.

Supporters of the treaty say we should just pressure the Russians to comply rather than pull out. But when confronted with their cheating, the Russians simply deny it. Meetings of the Special Verification Commission, the treaty’s mechanism for addressing compliance issues, have achieved nothing.

The Kremlin has remained unmoved, even though we have made it clear that we have them nailed. We have provided Russia the names of the companies involved in developing the missile and the coordinates of the locations of tests.

The Russians have persisted in it for the simple reason that it is in their interest. The former head of the Russian General Staff has commented that intermediate-range missiles would provide Moscow “national security assurance” — by threatening Poland, Romania and the Baltics, the missiles would “cool the heads of these states’ leaders.”

One thing that the U.S. and Russians can agree on is that it’s senseless that they are the only two countries in the world that are notionally forbidden from possessing this category of weapon. “Nowadays,” a Russian defense official complained in 2014, “almost 30 countries have such missiles in their arsenals.”

China in particular is outdoing itself. The head of U.S. Pacific Command, Adm. Harry Harris, told Congress last year that the Chinese military “controls the largest and most diverse missile force in the world, with an inventory of more than 2,000 ballistic and cruise missiles. This fact is significant because the U.S. has no comparable capability due to our adherence to the Intermediate-Range Nuclear Forces Treaty with Russia.” According to Harris, 95 percent of the Chinese missiles “would violate the INF if China was a signatory.”

Given Russian cheating, the INF treaty as a practical matter only prohibits the U.S. from having such missiles. What sense is there in that? There’s no reason to limit our capabilities and flexibility for the sake of an INF Treaty that doesn’t even constrain its other signatory.