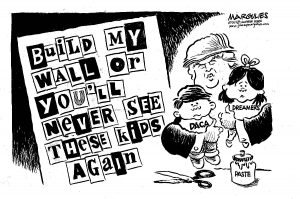 Tweety Bird Trump is at it again. Actually, he never really stops. I’m referring, of course, to President Tweety Bird Trump. One has to show all the due respect, and that is all I can muster. So Tweety is pecking away as he starts off the new year with his Twitter bombast bomb blasts.

Most of his output is the routine ridiculous stuff: He suggests that another political opponent — in this case Huma Abedin, who has been attached at the hip to Hillary Clinton her entire adult life — should be jailed  for her sloppy handling of classified emails, at least in President Tweety Bird’s mind. He also takes credit for the significant aviation achievement that there were no commercial airline fatalities in 2017. Of course, he had little to do with it.

And then there’s his running trash-talk battle with North Korea’s Kim Jong Un, who would be a clown, except for the fact that he’s developing a nuclear arsenal that threatens world annihilation if not expertly finessed. Tweety obviously is not a finesse kinda guy. He ridicules the North Korean tyrant by calling him “Rocket Man.”

They’re well-matched, and it’s not just their small, pudgy hands. They both have fragile egos that they try to cover with bluster. So when Kim makes a speech taunting the United States by saying, “The nuclear button is always on my desk,” Tweety Bird Trump can’t resist: “Will someone from his depleted and food starved regime please inform him that I too have a Nuclear Button, but it is a much bigger & more powerful one than his, and my Button works!”

Besides the fact that Tweety is once again displaying that he’s always very insecure about size, he’s also playing with fire at the very moment Kim also was hinting he might be willing to lower the temperature just a tad.

Maybe the Trump belligerence is part of an “Art of the Deal” scheme. I know … let’s do like everyone else and search for clues in his 1987 bestseller “Art of the Deal.” Yes, it was written by someone else with little input from Donald Trump, but let’s look anyway. How about this quote: “I never get too attached to one deal or one approach.” That might explain why Tweety Bird constantly contradicts himself. It keeps his adversaries off balance as they’re trying to bargain with him. The other side of that is that his word means very little because he can’t be trusted to mean what he says, and has little or no impulse control.

Here’s another insight worth pondering: “You can’t con people, at least not for long.”

That’s the thing: His base, those millions of people who were conned into thinking he’d be their champion, should have figured out from his actions that he was blatantly ignoring the reasons that alienated them in the first place. Instead, he has constantly promoted the interests of the same robber barons who have cheated the system and obliterated economic fair play. If “people will eventually catch on,” they certainly haven’t yet.

That other Tweety Bird, the cartoon figure, always exclaims, “I tot I taw a puddy tat.” When he looks at Trump, he’ll say, “I tot I taw an autocrat.”