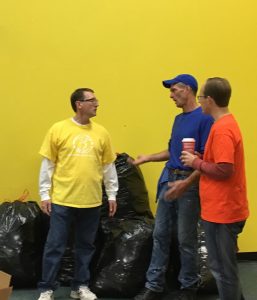 Bill Eich was this year’s organizer.

This year, Lance Dekker is old enough to be a contributor to the Crystal Lake’s Community Harvest.

The 5-year-old Lance joined his mother, Mandi, packaging food for people who suffer from food insecurity. Also on hand was his father and sister, David and Lily.

“We want to show the kids that it’s important to give back,” said David. “It’s part of our Thanksgiving tradition.

“The beauty of Community Harvest is that people are generous and they want to be involved,” said Marilyn Georgy, volunteer coordinator.

The parking lot of Hobby Lobby provided evidence of Georgy’s statement. It was packed to a Black Friday capacity with volunteers donating, sorting, and carry non-perishable food items. 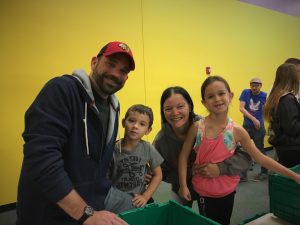 David and Mandi Dekker with their children Lance and Lily.

When discussing issues related to hunger and hunger awareness, the term food insecurity is commonly used. Food insecurity refers to household members having limited or uncertain access to adequate food due to insufficient money or other resources for food. In McHenry county, that means 8.8 percent of the population, or 27,000 people live with food insecurity. To put that number into perspective, that’s equivalent to somewhere between the entire population of Huntley or Algonquin.

Food insecure households are faced with having to make the difficult decision between buying food or paying their rent/mortgage, utility bills, car payment and/or medical bills. There are various reasons households need the assistance of the Food Pantry including disabled persons with limited access to food, job loss, single parent households and limited senior income. More than 77 percent of food insecure families are part of the working poor. 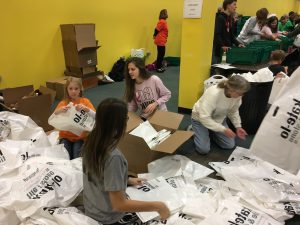 Georgy explained that many times people seeking relief are unfamiliar with the food donated. For example, Community Harvest collects many cans of pumpkin. The new location will offer a demo kitchen where clients can taste foods prepared with the donations, and get recipes. The Food Pantry plans to offer cooking lessons. 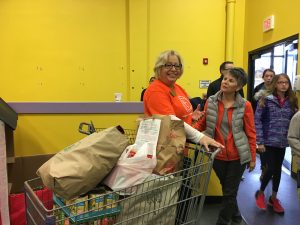 The Crystal Lake Library had a “Pay it Forward,” which encouraged the return of overdue books. During the drive, those who had delayed fines could pay half and get forgiveness for the remaining half. When they realized the money collected went to Community Harvest, most people chose to pay the whole fine. Some people paid even more than the fine required.

According to Eich, the generous outpouring of time churches, business, families, and individuals give on Thanksgiving Day is overwhelming. The donation center is abuzz with activity as hundreds of volunteers assemble boxes, fill boxes, weigh food, receive last-day donations, drive trucks, and help with clean up.

According to Eich, the donations from Community Harvest can last the Food Bank until August. The Food Bank accepts donations throughout the year because, as those who suffer from food insecurity know hunger doesn’t take a summer vacation.