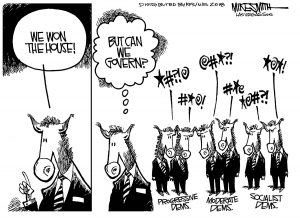 Joe Biden is a gaffe-prone 75-year-old Washington veteran — who is exactly what Democrats need.

The suburbs have turned against Republicans, but Donald Trump’s working-class base is still with him in a geographic and demographic stand-off that will — absent a game-changer — define the 2020 election.

The play for Democrats should be obvious: Make a serious appeal to Trump’s voters, take back the Blue Wall states of Wisconsin, Michigan and Pennsylvania, and win the presidency. In other words, go with Joe Biden or someone like him with a Midwestern or working-class sensibility (newly re-elected Sens. Sherrod Brown of Ohio and Amy Klobuchar of Minnesota come to mind).

His gruff manner, Catholic faith, Irish ethnic background, union-friendly politics and upbringing in Delaware via Pennsylvania make him as close as the contemporary national Democratic Party gets to a working-class match for the Great Lakes states that Trump stole from it in 2016.

From this juncture, those states again look absolutely crucial. If the rest of the electoral map stays the same, Democrats need to win all three of Wisconsin, Michigan and Pennsylvania to take back the White House. Even if they pick off 2016 red states Arizona and Georgia, they still need Michigan or Pennsylvania to get over 270.

Conversely, it’s hard to see where Trump goes and wins new territory to make up for the loss of Wisconsin, Michigan and Pennsylvania.

Trump didn’t win those three states by much, by about 80,000 votes collectively. More than anything, he depended on running against a Democratic candidate who was unacceptable to working-class whites. Right now, it looks like he needs a repeat performance by the Democrats, and he may well get one.

The Democrats don’t usually do old and familiar, at least not when they win. The last three Democratic presidents, Jimmy Carter, Bill Clinton and Barack Obama, were fresh-faced newcomers on the national scene.

And then, there are the party’s new obsessions. Class has been trumped by race and gender, and as a white male Biden is 0-2. Inequality is now less of a motivator than intersectionality, economic privilege less of a concern than white privilege. This was a stumbling block for the class-obsessed Bernie Sanders last time, and would surely hamper Biden and Sherrod Brown in today’s even more fevered context.

The Democrats are not set up to go with, in the derisive phrase, stale, pale and male. Perhaps they can find another Barack Obama-type candidate who lights up the base while having just enough draw for working-class whites. There also is more than one way to win back the Blue Wall — higher black turnout could make the difference.

But there’s a good chance that Democrats will get consumed by the hot-house dynamic of their nominating process, and select someone who, like those defeated progressive darlings of the midterms — Beto O’Rourke, Stacey Abrams and Andrew Gillum — is better suited to going down in a blaze of glory rather than winning over an increment of Trump voters.

If so, Joe Biden will be one of the few people in American history who could have won two straight presidential elections — in theory.

—Why Trump Should Fear Joe Biden–