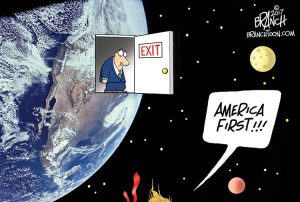 In an era of partisan polarization, it is rare to get agreement on anything, but about this there should be a consensus: The Supreme Court is an undemocratic institution whose power should be carefully circumscribed.

The right has long been of this view, and the left is suddenly and opportunistically partway there.

In an essay capturing progressives’ newfound skepticism, Ezra Klein of Vox wrote that the Supreme Court “has always been undemocratic” and is now becoming even “more dangerous.” This represents a welcome turnabout from cheering the high court’s de facto legislating, although the left is about a half-century late to the insight that the court isn’t a democratically elected legislature.

In the 1960s, the court became markedly more assertive, delivering a raft of activist decisions, especially on matters of criminal justice and sexual morality.

Progressives cheered all the while. They happily pocketed all the court-mandated policy changes to their liking, relieved of the burden of enacting them through democratic means.

Needless to say, the court was never meant to be an unelected lawmaking body, and it has taken on such a highly charged role in our politics, in part, because it arrogated this power to itself.

The court’s legitimacy comes from faithfully interpreting laws passed by the legislature and adhering to the Constitution that is the foundational governing document of the country, adopted and amended by “We the People.” Anything else is a usurpation.

Progressives are, perversely, taking a hostile view of the court precisely when it may get a reliable majority of justices devoted to this vision.

Klein alleges that the court is becoming affirmatively “anti-democratic,” meaning it isn’t striking down democratically adopted voter rules and gerrymandered districts. Klein may oppose the Ohio law that purges nonvoters from the rolls, but there is a remedy readily at hand — changing the law in Ohio.

If the left were serious about its new worries about an undemocratic court, it would welcome the prospect of overturning Roe v. Wade.

Indeed, the belief that voters in states will ban abortion or more stringently regulate it if Roe is overturned is the single biggest motivating factor in opposition to Supreme Court nominee Brett Kavanaugh. In other words, on this issue, the worry is that the court will allow too much democracy.

Of course, the court should act as a check on the popular will at times. But in doing so, it must limit itself to enforcing the law and the Constitution. This is the goal of originalism, which should be embraced by both sides as the appropriately modest view of the court’s role in our republic.

But this would represent an enormous loss for progressives.

First, a court that no longer envisions itself as an instrument of social change wouldn’t hand the left totalist victories unachievable in the political realm. Two, the animating vision behind the Constitution — written by men with a strong suspicion of centralized power — runs counter to the logic of progressive government.

So the left will bang on about the undemocratic court without changing its core belief that it is rightfully the vehicle for imposing its policies.

—Yes, the Supreme Court Is Undemocratic–