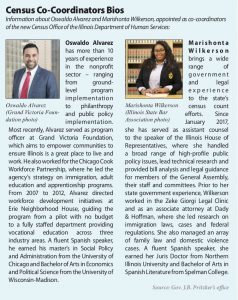 SPRINGFIELD — Gov. J.B. Pritzker’s office announced the appointment of two census co-coordinators Sept. 16, a position created by an executive order he signed in June to maximize participation in the 2020 U.S. Census.

State officials say up to two congressional seats and more than $1 billion in federal funding are at stake in Illinois if the complete population is not counted in 2020. That’s why the General Assembly allocated $29 million in state funding to an outreach effort that will be led by the newly created Census Office within the Illinois Department of Human Services.

Pritzker announced the co-coordinators of that office will be Marishonta Wilkerson, who has been serving in the role since August after more than two years as assistant counsel to Democratic Illinois House Speaker Michael Madigan, and Oswaldo Alvarez, who has more than 10 years of program implementation experience in the nonprofit sector.

“The 2020 census will determine if Illinois gets our fair share of federal resources and representation, and these outstanding leaders will be committed to ensuring a complete and accurate count,” Pritzker, a Democrat, said in a news release Monday. “With a $29 million investment and a new Census Office, the state of Illinois will fight against the fear tactics coming from the federal government and make known that we’re proud to be home to vibrant, thriving communities of all backgrounds.”

At the June signing of the Executive Order 10, which created the Census Office, Lt. Gov. Juliana Stratton said Illinois could lose $120 million annually for each 1 percent of the population that is undercounted — about $1.2 billion over the 10-year period between each census.

Illinois’ outreach effort will center on partnerships with community groups that are already working to promote census turnout. The deadline for those groups to apply for grants was Sept. 13.

According to the Census Office’s September report, $20 million has been allocated for the initial grants, while $9 million will be reserved for an additional round of grants to “address identified needs and communications and marketing efforts.”

According to the report, the Census Office anticipates awarding a grant to at least one regional intermediary in each of 12 regions identified by the office. The intermediaries will coordinate outreach efforts and provide “subawards” to “subgrantees” that will conduct census outreach efforts in their communities.

The hardest-to-count communities will be prioritized for the grants. The U.S. Census Bureau deems an area hard to count if the self-response rate in the 2010 decennial census was 73 percent or less.

Illinois is using 18 variables associated with low census response, including housing, income, household language and internet access, to determine where the millions in grant funding will be distributed. 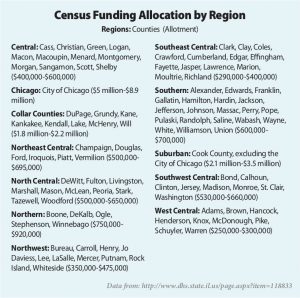 Anita Banerji, director of the Democracy Initiative of the nonprofit organization Forefront, which participates in census outreach, said the key to ensuring an accurate count is building trust in hard-to-count communities. In a July interview with Capitol News Illinois, she stressed that any information a person puts on census forms is confidential.

“There will be a lot of misinformation and disinformation out there in the year ahead,” she said. “The advocates will have to be working smarter and harder to ensure that all residents across the state have accurate information, they feel safe and protected, and understand why it’s necessary to self-report.”

One of the reasons self-reporting is necessary, Banerji said, is because census data helps determine a number of demographic figures that could affect business interest on top of federal and state government funding.

“You can’t be that thoughtful or that intentional about where these new roads or new hospitals or these kinds of (English as a second language) classes need to go if you don’t have accurate data,” she said. “So it behooves all of us to participate in this national civic engagement, civic duty, so that we can be providing a better future.”

In Monday’s release, IDHS Secretary Grace Hou said Illinois is “well on its way to ensuring a complete and accurate count.”

“We’ve never seen such a significant investment in the census until now, and we’re seeing a lot of excitement from our partners and stakeholders in the community,” she said. “We look forward to working with our grantees to continue our efforts and reach the communities and demographics that have previously been hard to count.”