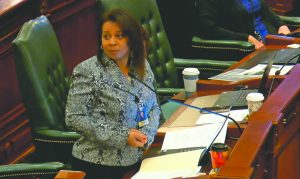 Rep. Rita Mayfield (D-Waukegan) speaks during debate Oct. 30 at the Capitol in Springfield of her bill to phase out the use of ethylene oxide except in sparsely populated areas of the state. The bill, which also significantly limits emissions, passed by the narrowest margin. Amendments are likely in the Senate when it reconvenes Nov. 12. (BlueRoomStream)

SPRINGFIELD — A strict ethylene oxide regulatory bill passed the state House Oct. 30 with no votes to spare and promises of further discussion and potential amendments in the Senate.

Just one Republican, Rep. David McSweeney of Barrington Hills, joined 59 Democrats in voting for House Bill 3888, while 47 lawmakers voted against it and four voted “present.” The present votes were from Democrats Curtis Tarver of Chicago and Elizabeth “Lisa” Hernandez of Cicero, and Republicans Deanne Mazzochi of Elmhurst and Jim Durkin of Western Springs.

Mazzochi and Durkin were two of the leading voices on a pair of ethylene oxide bills that passed in May. Those bills, Senate Bills 1852 and 1854, provide what Republicans and Democrats have called the strictest regulations in the nation when it comes to ethylene oxide, a known cancer-causing gas used in medical supply sterilization and manufacturing processes.

They were also leading voices against Sterigenics, a medical supply sterilization company that decided to leave the Willowbrook area earlier this year amid public outcry resulting from news of increased cancer risk in the area surrounding it.

Those two lawmakers voted for Durkin’s House Bill 3885 in committee Monday, but that measure, which would have allowed home rule municipalities to ban ethylene oxide sterilization facilities in their communities, failed to gain enough votes to move to the floor. During the committee hearing, Durkin would not commit any Republican votes to the bill that passed the House Wednesday, which is sponsored by Democratic Rep. Rita Mayfield of Waukegan.

In a news release after the committee vote, Durkin alleged that Democrats on the committee “put partisan politics ahead of the health and safety of Illinois residents.”

On Oct. 29, House Republicans requested several “impact notes” on Mayfield’s ethylene oxide measure, a procedural move that could have slowed the movement of the bill through the legislative process. Democrats voted to advance the bill without any of the notes.

In response, Stop Sterigenics, a grassroots advocacy organization that often worked alongside Durkin to pass the earlier ethylene oxide regulations and shut down Sterigenics, blasted the House Republican leader on Facebook.

“We’re extremely disappointed in Leader Durkin for being complicit in a childish attempt to derail House Bill 3888 during veto session today, himself voting 10 times to delay the bill which would in effect prevent it from passing during the very short veto session. It appears he is acting in retribution for HB3885 being procedurally dismissed in the environmental committee. Two wrongs don’t make a right, Leader Durkin. People’s lives are on the line. Do better,” their statement read.

In floor debate of Mayfield’s bill Wednesday, she said the expected Senate sponsor is state Sen. John Curran, a Downers Grove Republican. He was also a leader in the effort to shut down Sterigenics and pass the regulatory bills earlier this year.

Mayfield said further debate and potential amendments to her bill were possible in the Senate, but she did not want any amendments to violate the “spirit of the law.” That spirit, she said, is not to shut down any facilities, but to move ethylene oxide use away from areas with many people.

As it stands now, the bill would phase out the use of ethylene oxide except in sparsely populated locations in the state, and facilities in those areas would have to limit their emissions to 30 total pounds annually by 2021.

Business and industry groups have provided heavy opposition to Mayfield’s bill, calling ethylene oxide necessary for certain sterilization procedures in which the U.S. Food and Drug Administration does not allow alternatives. The FDA also recently warned of potential shortages of some devices if ethylene oxide facilities continue to close.

Medline Industries is a medical supply sterilization company in Mayfield’s Lake County House district that employs 700 people, many of whom came to protest the bill earlier this week.

The company released a statement saying it was “disappointed” by the bill’s House passage, although it will “look forward” to further negotiation in the Senate. The company argued Senate Bills 1852 and 1854 should be allowed to take greater effect to limit emissions before added ethylene oxide regulations become law.

“Medline is in the process of installing a series of new controls approved by the Illinois EPA that will capture more than 99.9 percent of all ethylene oxide used, emitting cleaner air from our facility than the surrounding ambient air,” the company said in its statement.

They said Medline produces and sterilizes “more than 16,000 sterile surgical packs per day used by 135 hospitals in Illinois — nearly 80 percent of the state’s hospitals.”

While Mayfield said she is up for further discussion of the bill in the Senate, she would not commit to any language changes without having seen them first. She said, to this point, Medline has not come to her with any proposed bill language.

“I’ve asked several times. They’ve given me nothing,” she said.

The Senate can take up the measure when the General Assembly returns on Nov.12, and Gov. J.B. Pritzker’s office has said he will sign it should it pass both chambers.