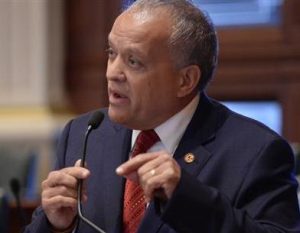 SPRINGFIELD – Federal prosecutors said Monday, Aug. 24 they still expect to file additional charges against former state Rep. Luis Arroyo, and a judge scheduled a hearing in 60 days so that Arroyo’s defense attorney has time to review “voluminous” information in the case.

During a brief status hearing that was conducted by telephone Monday, U.S. District Judge Steven Seeger scheduled the next hearing for 10:15 a.m. Tuesday, Oct. 27.

Arroyo did not take part in Monday’s hearing. He was represented by his defense attorney, Michael Gillespie.

“We do still have that expectation,” Assistant U.S. Attorney Christopher Stetler said during the hearing. “That’s (been) communicated with Mr. Gillespie on other issues as well. My understanding is that he’s still working his way through some voluminous discovery. The government has also agreed to provide some supplemental discovery to the defense.”

Prosecutors first indicated in June that additional, related charges could be forthcoming.

Arroyo, a Chicago Democrat, was charged in October 2019 with one felony count of bribery for allegedly attempting to pay $2,500 to an unnamed state senator, with promises of more to come, in exchange for the senator’s support of gambling legislation that would have benefitted one of Arroyo’s lobbying clients. The senator was wearing a wire at the time for federal investigators.

Chicago-area media outlets, citing unnamed sources, have reported that the unnamed state senator was Terry Link, a Democrat from Indian Creek in Lake County, although Link has strongly denied any involvement. Link was recently charged in an unrelated case with tax evasion for filing a false 2016 federal tax return.

Arroyo has pleaded not guilty to his charges, but he resigned his office Nov. 1, just ahead of a special House investigative hearing to determine whether he should be expelled from the General Assembly.

In addition to serving in the Illinois House, Arroyo operated a lobbying business that lobbied the city of Chicago on various matters. According to court documents, Arroyo was pushing for legislation to authorize the use of “sweepstakes machines” — video gaming devices that are similar to slot machines but which have not specifically been legalized in Illinois.

The criminal charge against Arroyo flowed out of a sprawling federal investigation into alleged political corruption that has focused on Chicago-area Democrats. That probe has also renewed calls in the General Assembly for sweeping ethics reform in the General Assembly, but lawmakers so far have not enacted any substantive legislation.

During their fall veto session last year, lawmakers passed a bill establishing a Joint Commission on Ethics and Lobbying Reform, which was supposed to issue a report with recommendations for reform in March, but its work was interrupted by the COVID-19 pandemic.