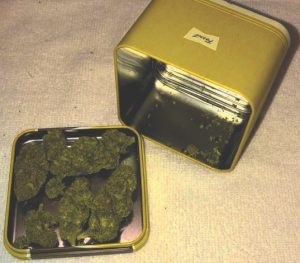 Illinois residents bought about $27 million of marijuana products in March, while out-of-state residents purchased about $8.8 million. Figures are not broken down in sales before the implementation of the March 20 stay-at-home order or after. (Chronicle Media photo)

SPRINGFIELD — More than $109 million of marijuana products were purchased in Illinois in the first three months of legalization, and the third month of sales was on par with the first two despite a stay-at-home order being in place for 11 days in March.

Preliminary numbers show statewide adult-use cannabis sales in March totaled $35.9 million, according to a news release on April 2 from the Illinois Department of Financial and Professional Regulation. Dispensaries across the state sold more than 812,000 items over the 31-day period. The March sales topped February’s $34.8 million and fell short of January’s $39.2 million.

Illinois residents bought about $27 million of marijuana products in March, while out-of-state residents purchased about $8.8 million. None of the figures include taxes collected, and they are not broken down in sales before the implementation of the March 20 stay-at-home order levied by Gov. J.B. Pritzker or after. That order did not apply to cannabis sales, which were deemed essential.

Per the release, both medical and recreational marijuana were deemed essential “to ensure the cannabis supplier industry protects medical cannabis patients during the COVID-19 pandemic,” and because revenue generated by adult-use sales funds social justice and equity goals that are “at the core of Illinois’ adult use law.”

Because of the COVID-19 pandemic, designated caregivers are allowed to pick up medical marijuana for the patients they care for, and dispensaries can sell marijuana to medical patients or caregivers on a public walkway or curb adjacent to the dispensary property. Dispensaries are not permitted to deliver medical cannabis to a home, however.

The exemptions, which are extended until April 30 along with the stay-at-home order, do not apply to recreational marijuana sales. Those must still take place inside the limited access area of the dispensary.

“Three straight months of consistent adult use cannabis sales show there is – and will continue to be – strong support and demand from consumers,” Toi Hutchinson, Pritzker’s senior advisor for cannabis control, said in the news release. “To ensure medical users are able to access the product they need during the ongoing COVID-19 pandemic, curbside pickup will remain an option for medical patients through April 30.”