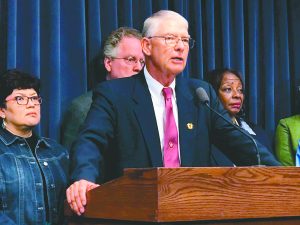 Bob Colvin, president of the City of Paris Economic Development Commission, said May 21 a lack of affordable housing in his community once posed the threat of some businesses going to Indiana. Paris is six miles from the border. Affordable housing “has helped us in Paris, Illinois, grow business and houses out of the cornfields of east-center Illinois,” Paris said. (Photo by Rebecca Anzel/Capitol News Illinois)

SPRINGFIELD — Lawmakers and advocates praised Democratic Gov. J.B. Pritzker for allocating funds for affordable housing in his proposed capital plan, but said May 21 his proposal is not nearly enough to properly address the infrastructure need that exists in Illinois.

In a preliminary plan called “Rebuild Illinois” and shared with legislators Friday, the governor allocated $175 million to build and improve cost-effective housing options primarily for seniors, those who are homeless, and people with disabilities.

But Democratic Rep. Delia Ramirez and Sen. Mattie Hunter, both from Chicago, were joined by community leaders from across the state in calling for the General Assembly to allocate nearly six times that amount.

Not only would citizens in need of a residence be able to find one, neighborhoods would receive investment and jobs and residents would remain in Illinois, she said.

“Housing is our state’s most important economic and social infrastructure,” Clements said. “Let’s provide an opportunity for Illinois families to build wealth and rebuild our neighborhoods in urban, suburban and rural communities.”

Hunter said she knows $1 billion is a big ask from state coffers, and a leap from Pritzker’s proposal, but is confident data proves affordable housing “substantiates” the need for the request. 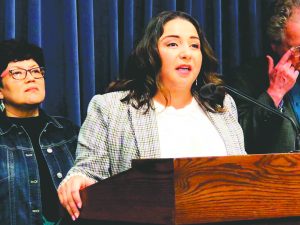 Democratic Rep. Delia Ramirez, of Chicago, speaks during a news conference May 21 at the Capitol in Springfield. Ramirez said this legislative session might be the best opportunity in a decade for advocates to push for as much funding as possible for affordable housing projects in Illinois. Pictured to the left of Hunter is Imelda Salazar, a parishioner of St. Rita in Chicago and a member of Southwest Organizing Project in Chicago. The her right is Jeff Bartow, executive director of Southwest Organization Project. (Photo by Rebecca Anzel/Capitol News Illinois)

The coalition’s plan is to ask the General Assembly to come up with an additional $325 million, bringing the total ask to $500 million. That would enable Illinois to apply for federal matching dollars to shore up the rest.

“But we’re running out of time right now because folks are looking to pass the capital budget next week,” Hunter said, referring to the session’s scheduled end date of May 31. “Even if the $1 billion or the $500 million is not in the capital budget, we are, in the Senate, continuing to work on it until we get the money that we need to get the job done.”

The senator did not identify specific grants or federal programs to which the state would apply.

“That’s outrageous, it shouldn’t certainly take that long, so this is why, for us, seeing this opportunity that won’t come around for another 10 years is being one of the most important, pertinent moments to be able to justify and push for as much as possible,” she said.

Illinois would need to build or rehabilitate at least 23,000 affordable housing units to catch up, said Erica Smith, executive director of Helping Hands of Springfield.

Chicago is facing a large share of the state’s cost-effective housing shortage. Some Democratic legislators tried introducing rent control legislation this session as a way of keeping housing costs low as neighborhoods across the city continued to gentrify, and to assist smaller cities in the state.

Ramirez, Hunter and the coalition of advocates are moving forward with funding for affordable housing because, Hunter said, they “felt [they] could better address” that issue than rent control at this point of session. 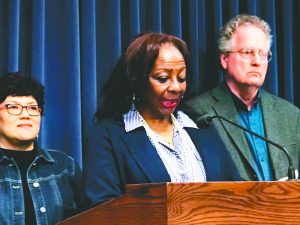 State Sen. Mattie Hunter (D-Chicago) speaks during a news conference May 21 at the Capitol in Springfield. Hunter, other lawmakers and community leaders are pushing for a far greater allocation of capital funds from the state for affordable housing infrastructure than the $175 million Gov. J.B. Pritzker included in his plan unveiled Friday. Pictured to the left of Hunter is Imelda Salazar, a parishioner of St. Rita in Chicago and a member of Southwest Organizing Project in Chicago. The her right is Jeff Bartow, executive director of Southwest Organization Project. (Photo by Rebecca Anzel/Capitol News Illinois)

“We’ve not forgotten about it. That’s something that’s on the side right now, and we’ll continue to revisit it until we can get enough legislators that are willing to vote for rent control in the state of Illinois,” Hunter said.

Paris, Illinois, is a community with 9,000 residents that is six miles from the Indiana border. It is home to big industry — North American Lighting, a car lighting manufacturer; and Simonton Windows & Doors, to name a few — and a workforce to match.

A problem the city ran into was providing enough homes for the labor pool the companies needed. With Indiana so close, said Bob Colvin, president of the City of Paris Economic Development Commission, some of the businesses threatened to go across the border.

Affordable housing “has helped us in Paris, Illinois, grow business and houses out of the cornfields of east-central Illinois,” Colvin said.

Illinois last put money toward a capital bill in 2009. From that plan, $145 million was allocated for affordable housing, according to Build Up Illinois.