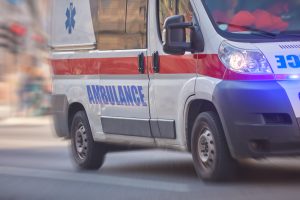 Chris Vandenberg, president of the Illinois State Ambulance Association, said House Bill 684 is was in response to the “arbitrary” denial of ambulance claims by Medicaid managed care organizations, or MCOs.

SPRINGFIELD – Stakeholders are calling on Gov. J.B. Pritzker to sign a bill that passed the General Assembly unanimously and would remove non-emergency ambulance services from the state’s Medicaid managed care program in favor of a fee-for-service model.

While an association group representing ambulance services says House Bill 684 is needed to counter arbitrary denials of claims by private insurers, the governor’s office and the state agency that oversees Medicaid expressed “serious concerns for patient safety and cost” as Pritzker continues to review the bill.

While the bill is a targeted carveout of ambulance services from the state’s Medicaid managed care program, or the privatization of Medicaid, it marks the latest catalyst for debate over the effectiveness of that program which was greatly expanded in 2017 under former Gov. Bruce Rauner.

Chris Vandenberg, president of the Illinois State Ambulance Association, said in a phone call Monday, Aug. 23 the bill was in response to the “arbitrary” denial of ambulance claims by Medicaid managed care organizations, or MCOs.

MCOs are private insurance companies that contract with the state to manage the care of individuals enrolled in Medicaid. Among other things, that involves working with patients to make sure they receive routine exams and preventive care, and coordinating services provided by their primary physicians and other specialists.

But Vandenberg charged that leads to MCOs padding profits through denial of claims.

“Since managed care began in Illinois, it’s been a struggle,” Vandenberg said. “So, we have EMTs and paramedics that are working, trying to transport patients, and really, we’re not able to get any of this reimbursement. …And so it’s really impacted the ability to attract and retain EMTs and paramedics, and really it’s causing a serious impact to Medicaid beneficiaries in that they’re not able to find transport as easily as they used to.”

Putting ambulances back in the fee-for-service system would allow providers to submit claims directly to the state Department of Healthcare and Family Services, which Vandenberg said would provide predictability and certainty to the billing process.

But Jamie Munks, a spokesperson for HFS, said in a statement the department “remains strongly opposed” to the ambulance carveout, “because it has the potential to negatively affect the quality of service, create longer wait times for medical transports and payment delays for providers, and could create confusion for customers and providers.”

Munks also pointed to about $3 million of potential lost revenue due to the state’s tax on MCOs which generates greater federal reimbursement resulting in hundreds of millions of dollars in revenue annually. She also noted unspecified “administrative costs” in switching ambulances back to fee-for-service.

If Pritzker doesn’t act on the bill by the end of the week, it would become law even without his signature. If he vetoes it, lawmakers would be able to override the action with a three-fifths majority when they meet for the veto session this fall.

Pritzker spokesperson Jordan Abudayyeh said in a statement the governor “will take the appropriate action” before this weekend’s deadline, but, “The administration is concerned that this legislation has the potential to disrupt care and reduce the quality of provided services to some of the most vulnerable Illinoisans.”

Specifically, the governor’s office said a Medicaid enrollee needing a non-emergency ambulance ride can currently contact their MCO and be connected with an ambulance transport that’s contractually obligated to respond “in a timely fashion.”

But the administration fears if the governor signs the bill, “a consumer will be forced to use the vendor contracted with by the fee-for-services program — a vendor that is not contractually bound to provide timely services.” 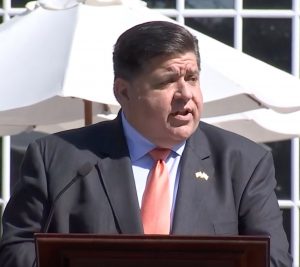 Gov. J.B. Pritzker is pictured at a ceremony at University of Illinois Urbana-Champaign on Aug. 23. He has until the end of the week to sign or veto a bill removing non-emergency ambulance services from the state’s Medicaid managed care program. (illinois.gov)

“Consumers would be forced into the uncertain position of not knowing which of their health care services are covered by their MCO, and whether they will be able to secure transport in a timely fashion,” Abudayyeh said in the statement. “During the COVID-19 pandemic, the Department of Healthcare and Family Services received consumer complaints regarding the difficulty of securing transport from their fee-for-service vendors to get to non-emergency health care services like check-ups and dialysis.”

But advocates for the bill, including Rep. Will Davis, D-Homewood, who is one of its chief co-sponsors, argued the current MCO structure is what’s threatening response times.

Davis said private ambulance companies often handle the 911 calls for communities that are underserved medically, such as the cities of Harvey and Markham in Chicago’s south suburbs. While companies contracting with those municipalities are already on the fee-for-service structure for emergency services due to changes made in April, payment uncertainty for other transportation services those providers render could affect staffing levels, Davis said.

“It’s not just, you know, the providers trying to get paid,” Davis said. “Their ability to receive resources helps their ability to keep their staffing levels up so they can bring down response times when people call 911. So there’s the staffing aspect of it, there’s the idea of making sure that they can provide services to underserved communities.”

Representatives of the Ambulance Association said an early amendment to HB 684 removed non-ambulance medical transports in an effort to address transportation concerns. The current bill is simply a way to “get paid for the services provided,” which they’ll still be obligated to provide under a fee-for-service system.

Samantha Olds Frey, CEO of the Illinois Association of Medicaid Health Plans, cited concerns similar to Pritzker’s about how the bill “impacts our most vulnerable members that need non-emergency ambulances for routine care such as dialysis treatments, doctor’s appointments, or scheduled hospital trips.”

She noted MCOs can offer higher reimbursement rates than HFS can for such a transportation service, so moving it back to a fee-for-service plan could further jeopardize those Medicaid enrollees. While MCOs have care coordinators that make follow-up calls to transporters to connect a customer to a service, HFS does not, she added.

“IAMHP met with the industry during the legislative session to try and find a solution that doesn’t jeopardize the care our members receive,” she said. “The ambulance industry refused to come to the table in good faith. However, we are still willing to understand what the systematic issue is and work toward a solution.”

Davis, meanwhile, said concerns over “arbitrary” claim denials from MCOs are nothing new or unique to the ambulance industry.

That’s why, as part of a health care reform backed by the Illinois Legislative Black Caucus earlier this year, lawmakers created a Managed Care Oversight Commission to, according to Davis, “really dive deep into if we’re going to continue to have an MCO structure – which, you know, some really don’t want – that we can have more oversight and input into how they operate versus kind of the autonomy that they enjoy right now.”

While Davis said HFS has “abdicated” its oversight role of MCOs, Munks said for over two years the agency has been “holding frequent meetings with providers and health plans, a forum to bring everyone together to resolve issues.”

She said HFS put in place a “claims clearinghouse” creating greater transparency into claim denials, “allowing the department to have better oversight of certain billing issues.”

She said claim denial rates for non-emergency ambulance services within the fee-for-service program are 40 percent, while MCO denial rates are between 10 and 15 percent, although the Ambulance Association disputed that claim, saying the denials it experiences are through MCOs.

As well, while HFS cited a billing complaint portal that has received only four claims in more than 17 months, the Ambulance Association dismissed that portal as “another way to give the providers the runaround.”