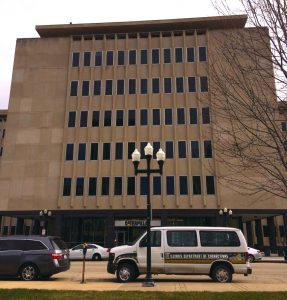 Like many Illinoisans, I was saddened to learn that Caterpillar Tractor Company is moving its world headquarters from our state to Texas. CAT has been an important company in Illinois. It has been especially vital to my hometown of Peoria, where its world headquarters were located for nearly nine decades. My dad was a civil engineer who spent his entire career at CAT and working there allowed my parents to put six kids through college. I have always been grateful to the company and admired its deep commitment to Peoria. It was the pillar of the community and appeared to relish that role.

But it’s not for solely personal reasons that I find CAT’s decision to leave Illinois troubling.

First, when a company moves its global headquarters, its active commitments shift, which has a profound effect on the community left behind. People’s lives are changed, and communities are altered forever. This is especially true for Peoria, which built its economic and cultural life around CAT. Peoria is welcoming new firms and industries, but the path ahead is daunting. The city will never be the same.

Second, I have been troubled by some of the reaction to CAT’s decision. I have read several articles that have been full of recriminations and finger pointing. Several analysts have seized on CAT’s decision to reprise familiar arguments about Illinois’ unfriendly business climate. While we must do more to address our state budget and improve our worker’s compensation system, Illinois continues to attract scores of new firms and remains the global home for dozens of major companies. I see no credible evidence that Illinois’ overall business climate was a major factor in CAT’s decision.

Third, I am especially disappointed in public comments made by CAT’s senior executives over recent years that have been confusing and contradictory, edging toward disingenuous.

In February 2015, CAT CEO Doug Oberhelman announced plans for a magnificent new global headquarters in Peoria. He brandished a video with a striking architectural rendering of a gleaming new complex with three towers and offices for more than 3,000 employees on 30 riverfront acres. “We’re here in Peoria to stay. Our long-term future is here,” Mr. Oberhelman declared at a public event attended by cheering business, civic, and political leaders, including then-Gov. Bruce Rauner. “Caterpillar will stay in Peoria. I repeat, we will stay in Peoria,” CAT’s leader pledged.

Less than two years later, CAT issued a press release saying it would “locate a limited group of senior executives and support functions in the Chicago area later this year.” The company “reaffirmed the ongoing importance of its presence in Peoria and Central Illinois.” When the statement was fully unpacked, it was clear that CAT was moving its global headquarters to suburban Chicago. “Locating our headquarters closer to a global transportation hub, such as Chicago, means we can meet with global customers, dealers, and employees more easily and frequently,” said Jim Umpleby, CAT’s new CEO. He added: “We value our deep roots in Central Illinois and Peoria will continue to be our hometown.”

Then on June 14, 2022, Mr. Umpleby announced that CAT was leaving Deerfield for Irving, Texas. “We believe it’s in the interests of the company to make this move, which supports Caterpillar’s strategy for profitable growth as we help our customers build a better, more sustainable world,” he said opaquely.

Pressed for a fuller explanation, a CAT spokeswoman said the Texas location “will give us the ability to attract new talent and provide additional career opportunities for our current employees to aid in retention.” How would this help CAT retain its workers? Is CAT moving to Texas so that its workers will find “additional career opportunities” with other firms in that state?

CAT has every right to locate its global headquarters where it wishes, and I appreciate that circumstances change. CAT still has more than 17,000 employees in Illinois and about 12,000 in the Peoria area.

I believe that CAT has a responsibility, as a good corporate citizen, to explain honestly and clearly why it is making its decisions. That does not seem too much to ask of a firm that referred to itself as a “great American company” in a U.S. Senate hearing. It is deeply disappointing that CAT has failed to honor commitments and offers empty rhetoric instead. This behavior is unworthy of a “great American company” and is unfair to the people of Illinois.

Unfortunately, the current leadership of CAT has given us additional reasons not to trust the words of corporate America.