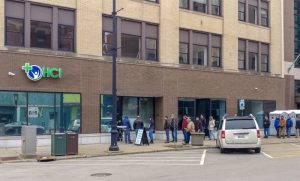 Customers wait in line Jan. 2 outside of HCI Alternatives in Springfield to purchase marijuana for recreational use. In the state’s seventh month of legalization, new applicants to the industry have been left in the lurch as the granting of new licenses has been delayed due to the COVID-19 pandemic. (Photo by Jerry Nowicki/Capitol News Illinois)

SPRINGFIELD — One of the few things unaffected by the coronavirus pandemic’s presence in Illinois has been recreational marijuana sales.

The $47.6 million spent on the product in June was the highest single-month amount since recreational marijuana use became legal at the beginning of the year, and sales have increased each month since February even amid strict stay-at-home orders.

Still, while sales boom, the facets of the landmark legalization law that were put in place specifically to diversify the largely white male-dominated industry have not moved forward as planned.

Toi Hutchinson, a former state senator and Gov. J.B. Pritzker’s lead cannabis policy adviser, said the state is doing all it can to expedite the licensing process, but the pandemic created a “perfect storm.” That has led to the delays for application filers and a third-party grader that was enlisted to make sure nobody gets an undue leg up in the application process.

“That’s one piece, but the other piece is that all-government shutdown,” Hutchinson said in a phone call Wednesday. “It didn’t stop the work but it’s slowed it … . People had to figure out how to do what it is we needed to do on almost hourly basis for a novel virus that we didn’t see coming.”

As one of the strongest advocates for the law’s social equity measures while she served in the Senate, Hutchinson said she was acutely aware of the setbacks caused to the groups the legislation was designed to help enter the market.

The social equity applicants — those whose majority ownership stakes include persons disproportionately impacted by the war on drugs — have been especially left in the lurch as their expenses mount and clarity as to when licenses will be released is lacking.

On Thursday, July 9, Hutchinson gave a ballpark date as to when the applicants might have that clarity.

“Well, we know that by the date that we filed the permanent rule for the tiebreaker scenario … will be in place in September,” she said. “The minute those things are in place we can go to the tiebreaker phase.”

She added, “We’re coming to the end part of the arc.”

“I just really want people to stay as encouraged as possible because we know how hard this was, and we know how difficult it was and we know how much people really are watching to see how this … and it’s not just us here — the world is watching,” Hutchinson said.

Hatchett’s diverse group of investors say they are dedicated to “creating new jobs for those long unable to access the American Dream and building up communities that have suffered from years of disinvestment.”

The group submitted 10 applications for dispensaries, many in downstate Illinois and some in the suburbs of Chicago. The team also applied for two craft grow licenses, even though they can only be granted one in the first round of applications.

But with the money the group has spent — Hatchett invested $200,000 of his own money into the project — and no resolution of licensing in sight, Hatchett said, a feeling of “anxiety” has pervaded the business endeavor.

“And we’re sort of at the point of no return as a social equity applicant, meaning we now are like a plane that’s gone beyond — we can’t go back for fuel,” he said in a phone interview last week.

Hatchett said stablished marijuana companies have the branding advantage, have been selling medicinally for years and had first crack at secondary site locations when the new law was passed.

While Hutchinson said a goal was to make applications simple enough so that applicants didn’t incur major expenses — such as hiring experts — in order to file them, Hatchett said that’s not been the case for groups like his. There’s a $5,000 fee per each application submitted to the state, and Cannabliss Supply Co. also incurred legal fees, hired lobbyists and paid for some graphic design branding work.

“You’d be surprised how much we have to spend. First of all the application process, to write it, and to the people that we had to hire,” he said. “And then the lobbyists, we had to make sure we did all the right things, that we didn’t fall on a sword right from beginning.”

Hutchinson said that while the original bill was written so that new licenses would be granted on a staggered timeline — first dispensaries, then craft growers — that schedule “was obliterated with the delays.”

“If you just look at the timeline for when the permanent rule goes into effect for the tiebreaker scenario on the dispensary, it’s gonna fall around the same time that the craft grow thing happens. So, I think what we’re gonna see is a lot of activity at one time,” she said.

Hatchett said his group will likely need to hear good news in both categories to be able to compete with the existing players.

“If I don’t get multiple locations, I may not be able to have pricing and economy of scale, so I’m gonna have to go maybe pay more than my competitors for the same product as some of these grow facilities until, hopefully, we will also win a cultivation craft license to grow our own,” he said.

Hutchinson said capitalism in general favors those who already have greater means, and while one of the goals of the legalization law was to disrupt the existing industry, it’s going to take more than six months for it to come to fruition.

“It is very difficult to compete in a world where you have some vertical operations and some independent operations,” she said. “That’s absolutely a fact. And moving forward, there may be things that the Legislature will try to enact. There may be certain areas that individual cities and counties will try to enact … . None of us can afford to be naive about the fact that this industry had a 10-year head start before Illinois became the 11th state (to legalize marijuana) and tried to figure out how to disrupt it.”

Two of the other social equity measures — mass expungements for nonviolent marijuana-related convictions and the R3 (Restore, Reinvest and Renew) fund to invest in disproportionately impacted communities — are on pace as planned, she said.

“We have obviously collected a lot of tax revenue in the six months that this has been operational,” Hutchinson said. “And we have every intention of making sure that that money that’s supposed to go to the R3 program is targeted to the communities that have been hit the hardest by the war on drugs.”

While courts were shut down or slowed by the pandemic, Hutchinson said the five-year timeline of addressing more than 700,000 convictions or arrest records was still on track.