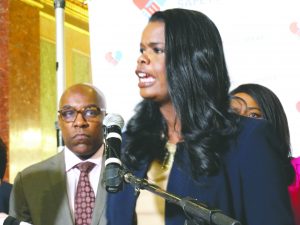 SPRINGFIELD – Two of the state’s top prosecutors joined a rally at the Capitol on Thursday with dozens of crime victims and survivors from across Illinois, calling on lawmakers to support programs to help them recover from their trauma.

Illinois Attorney General Kwame Raoul and Cook County State’s Attorney Kimberly Foxx told the crowd that state lawmakers need to do more to those support programs, and that the victims and survivors themselves deserve a seat at the table when policy decisions are being made.

“These survivors reflect the diversity of our state and voices that often have not been brought to the table on policy discussions,” Foxx said. “I say this as someone who comes from public housing and knows that the wealth of information and insight we bring to these discussions is often left behind.”

The rally, organized by the group Crime Survivors for Safety and Justice, was similar to ones being held in state capitols throughout the country. It included people who have been direct victims of violent crime as well as surviving family members of murder victims, many of whom held photos of the children and other loved ones they had lost.

The state of Illinois operates a number of programs for crime victims, most notably the Crime Victims Compensation Program which, since 1973, has provided cash assistance to victims to help them defray costs such as medical bills stemming from violent crimes.

And in 1993, Illinois voters approved a constitutional amendment known as the Crime Victims Bill of Rights, which includes the right to be notified of court proceedings and the right to be protected from the accused throughout the criminal justice process. 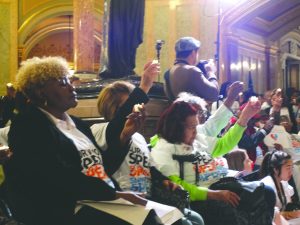 People hold candles during a moment of silence to remember loved ones they have lost to violent crime during a Statehouse rally on Thursday to call attention to the needs of crime victims. (Photo by Peter Hancock/Capitol News Illinois)

In addition, Raoul said that during his time as a state senator, he helped establish a pilot program of trauma recovery centers for crime victims.

“We have two in the state offering hospital-connected, trauma-informed care to relieve post-traumatic stress and to make sure that survivors of crime are treated first as people who have experienced the worst trauma in their lives, instead of treating them first as a complaining witness,” he said during an interview after the rally.

Both Foxx and Raoul have campaigned as ardent supporters of criminal justice reform measures, which often involve reducing sentences for certain crimes and providing services to prison inmates to help them reintegrate into society. Both also insisted, however, that they don’t believe supporting criminal justice reform and supporting crime victims are not contradictory positions.

Foxx, who has often talked about her own experience as a victim of childhood sexual abuse, said one of the keys is addressing the generational cycle of violence that often plagues families and communities.

“Our ability to create a safer Illinois for everyone requires a transformation in the way we spend our resources … and how we think about the cycles of crime and violence,” she said. “Rather than focusing solely on incarceration, we need more accountability. Rather than building more prisons, we need more focus on prevention and rehabilitation.”