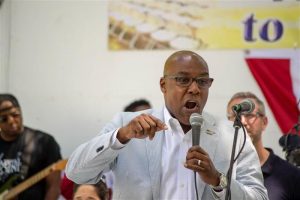 Illinois Attorney General Kwame Raoul (D-Chicago), pictured in a file photo at Governor’s Day at the Illinois State Fair, is calling on the Illinois Commerce Commission to re-examine a decision that would give energy companies more than 30 years to pay rebates to consumers. (Photo by Jerry Nowicki/Capitol News Illinois)

SPRINGFIELD — Two of the state’s largest electric utilities owe their customers a combined $543 million in refunds, according to state regulators, but there is sharp disagreement over how much time the companies should have to pay it back.

At issue for Ameren Illinois and Commonwealth Edison, also known as ComEd, is money they collected to pay future tax bills before federal tax cuts which took effect in 2018 lowered those anticipated rates.

When the corporate tax rate was slashed from 35 percent to 21 percent, both companies found themselves holding onto large surpluses, known as “excess deferred income taxes,” or EDIT.

In a pair of rulings last year, the Illinois Commerce Commission, which regulates public utilities, said ComEd could pay off its EDIT over 38 years and Ameren could pay off its bill over 35 years. But on Monday, Illinois Attorney General Kwame Raoul announced he is asking the ICC to reconsider that decision and shorten the payout period to just five years.

“Consumers paid public utility rates to ComEd and Ameren reflecting the higher federal tax rate, and now that the federal tax rate has lowered, fairness dictates that consumers should get that money back,” Raoul said in a news release. “Allowing an unreasonable refund period of close to 40 years nearly guarantees many customers will never get their fair share of the refunds.”

The issue has to do with how utility rates are set and regulated. Essentially, companies are allowed to recover their cost of providing service and make a “reasonable” rate of return, or profit. The cost of service includes such things as the cost of building and operating power plants and transmission lines. It also includes the cost of taxes owed to various levels of government.

When a company builds a plant, it recovers that cost over the expected useful life of the plant, typically around 40 years.

In their cases before the ICC, ComEd and Ameren acknowledged that the tax law change reduces their cost of service, but they argued that the duty to return the excess deferred tax money they collected should be spread out over the life of their facilities so that both current and future ratepayers will be treated evenly.

But it also means customers will see a reduction in their bills of only a few pennies per month instead of a few dollars, according to Jim Chilsen, spokesman for the Citizens Utility Board, a nonprofit entity established by the state to represent residential and small-business customers in utility rate cases.

In testimony before the ICC, both Raoul’s office and CUB argued future customers are not entitled to the benefit of a refund because they aren’t the ones who paid the higher-than-necessary rates. They also argued the longer payout period will mean that many customers who were charged higher rates prior to the change in tax law will never see their full refund.

CUB argued in favor of a seven-year payout schedule while Raoul’s office argued for five years.

“We completely agree that it’s only right that ComEd and Ameren consumers get their money back over a more reasonable time period,” Chilsen said in an email statement. “Making customers wait decades to get their money means that a significant number of those customers won’t be able to enjoy their full refund. That’s not right, that’s not fair.”

He also noted that many other states — including Missouri, where Ameren also operates — have adopted 10-year payout schedules.

The ICC has not said whether it will grant the request for reconsideration.