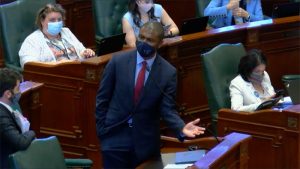 The measure is meant to address shortcomings in the 2019 Cannabis Regulation and Tax Act, specifically in regard to a license lottery that was delayed by the pandemic, controversy and legal disputes for over a year.

It passed the House in a 70-33 vote with bipartisan support, but also bipartisan opposition. Democratic Rep. Carol Ammons, of Urbana questioned whether his legislation accomplished the social equity spirit of the initial marijuana legalization legislation.

Ford described his bill as the best way to increase the possibility of local Black and brown communities in Illinois getting access to the booming marijuana industry.

“I wish I could write a bill that would guarantee that Black people wouldn’t worry about the things that we worry about today, and that there was justice for all,” Ford said.

The 75 licenses initially set by the 2019 law were supposed to be granted by May 2020, but were sidelined by the outbreak of the COVID-19 pandemic. They were later delayed again following backlash over how applicants for the licenses were scored, and pushed back a third time following lawsuits against the state by the finalists of the initial lottery after Gov. JB Pritzker announced applications that did not meet the cut could be edited and rescored.

Originally, the process as intended would award licenses in order of applicant scores with tiebreaker lotteries for applicants who received the same score. However, after just 21 of more than 900 applicants received a perfect score to become eligible for the lottery, a hold was placed on the lottery system.

Under Ford’s legislation, the first new batch of 55 licenses would be offered through a “Qualifying Applicant Lottery” which would only be open to applicants who scored 85 percent or higher on submissions for the first 75 licenses.

This would provide a chance at dispensary licenses to firms who did not receive a perfect score and were excluded from the initial 75-license lottery, and firms who did qualify for the initial tiebreaker lottery but have not hit the 10-license cap for applicants.

The second new batch of 55 licenses would be offered through a “Social Equity Justice Involved Lottery.” Those eligible must have scored 85 percent or higher on their submission, and must also qualify as a social equity applicant. That means 51 percent of the firm’s ownership must be someone who has lived in an area impacted by the war on drugs for 10 years, have been arrested or convicted of a marijuana crime eligible for expungement, or be a member of a family impacted by the war on drugs.

Another lottery of five licenses for medical cannabis dispensaries would also be open to applicants who were eligible for the social equity or qualifying lotteries.

According to Ford, based on his conversations with the Pritzker administration, the new scores for amended applications will be released and the initial lottery will be completed following the passage and signing of HB 1443.

“As a state that values making our laws reflective of our diverse communities, we must ensure that social justice is at the center of everything we do,” Pritzker said in a statement praising the passage of the bill May 25.

Ford celebrated the passage of the bill in his own statement released following the House vote.

“Instead of allowing the wealthy few to maintain control of this new industry, let’s give people in areas that have been left behind a real opportunity to start a local business that is owned and operated by members of the community,” he said.

HB 1443 now heads to the Senate, where the General Assembly has until Monday’s legislative deadline to pass it with a simple majority.