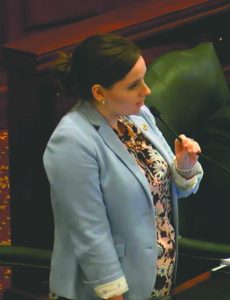 Rep. Avery Bourne, of Raymond, said during April’s House debate on the consent bill that fuller legal definitions of consent are “an important conversation that needs to be had” in schools that choose to teach them.

SPRINGFIELD — A bill making school districts that teach sex education give a fuller definition of sexual consent is on its way to the governor to be signed into law.

House Bill 3550, sponsored in the House by Democrat Ann Williams, of Chicago, and in the Senate by Majority Leader Kimberly Lightford, of Maywood, passed unanimously out of the Senate May 29, after being approved by House lawmakers in early April.

School districts that don’t opt out of teaching sex ed must follow a curriculum that includes abstinence, contraceptive methods and discussions of consent. Consent, however, is given no definition under the law, which says only that schools must provide a “discussion on what constitutes it.”

“Consent is not just a matter of yes and no,” Rep. Williams said in House debate on the matter in April. “Consent is a very complex subject that needs to be explored in a comprehensive way. It is so much more than just saying no means no.”

The fuller definition provided in the law includes, among other things, that “consent is a freely given agreement to sexual activity;” that “consent to one … sexual activity does not constitute consent” to another; that “lack of verbal or physical resistance,” nor a person’s “manner of dress,” does not mean consent; and that a person cannot consent if they “can’t understand the nature of the activity” due to the effects of drugs or alcohol.

The only opponents to the bill were six House Republicans. While GOP Rep. Avery Bourne, of Raymond, voted in favor in April, she said opponents were concerned that the bill was a mandate on school curriculums, and they questioned whether fuller definitions of consent would be age-appropriate for some grade levels.

“Unfortunately it’s not a mandate, because I do believe sex ed should be taught across the board,” Williams said at the time, adding that it was still up to school districts to opt in to teaching the subject and to develop their own curriculums that are, by law, “age-appropriate.”

“I think that this is an important conversation that needs to be had, so thank you,” Bourne said to close the debate.