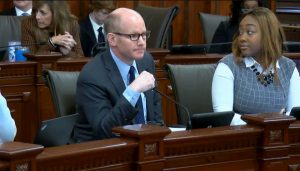 Sen. Don Harmon (D-Oak Park) said during the Nov. 13 hearing at the Capitol in Springfield that legislation to phase out ethylene oxide use in densely populated areas of the state fell victim to information overload from “dueling scientists.” Harmon is chairman of the Senate committee that rejected the bill Wednesday. (BlueRoomStream.com)

SPRINGFIELD — A bill that would phase out the use of ethylene oxide except in sparsely populated areas of the state is headed back to the negotiating table after failing in a Senate committee Wednesday, Nov. 13.

Ethylene oxide is a gas used in manufacturing and sterilization processes. It is designated by the U.S. Environmental Protection Agency as carcinogenic. A late amendment to the bill changed the length of the phase-out period and excluded several geographic areas among other changes.

The bill’s Senate sponsor, Sen. John Curran (R-Downers Grove) said the amendment fulfilled promises made by House sponsor, Rep. Rita Mayfield (D-Waukegan), but he had not taken part in those negotiations. He said he will try to start again on a new proposal when the General Assembly returns for its regular legislative session in January.

Many on the committee indicated they fell victim to information overload, or what committee Chairman Don Harmon (D-Oak Park) referred to as, “suffering from dueling scientists.”

“I don’t know if any of us feels expert enough to evaluate them critically in the time pressure here,” Harmon said of the scientific studies from each side that presented starkly different realities.

Harmon said the legislation has an effective date that is six months down the line and it wouldn’t begin to remove any ethylene oxide emissions from the air “for another two-and-a-half years,” so the General Assembly would have time to study the matter further. Still, he warned the decision did not constitute a “win” for opponents.

“Let’s not let the media dictate here what we’re passing in this chamber,” she said, noting contradicting testimonies on potential job losses, medical supply shortages and even the potential of the gas to cause cancer. 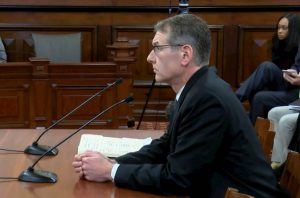 Republican Sen. John Curran of Downers Grove testifies Nov. 13 in Springfield during a Senate committee hearing on his bill to phase out the use of ethylene oxide except in sparsely populated areas of Illinois. The committee voted against advancing the bill, and Curran vowed to bring a new proposal to the General Assembly when it returns for its regular legislative session next year. (BlueRoomStream.com)

Sen. Mattie Hunter (D-Chicago) suggested that confusion was the goal of some who testified.

“Everyone has a different story, and that is to confuse us,” she said before voting to advance the measure out of committee.

Proponents testified of increased cancer risk in areas surrounding ethylene oxide emitters, while industry-paid scientists said the only indicator of risk was a new, “theoretical” interpretation of existing data by the USEPA.

Curran testified that a cancer cluster study conducted by the Illinois Department of Public Health showed women and girls in the WIllowbrook area, which was near a recently-closed Sterigenics ethylene oxide sterilization facility, have cancer rates “nine to 11 times higher than a similarly situated area would likely have.”

While proponents said businesses could remain in operation by moving to sparsely populated areas or switching chemicals used in sterilization processes, opponents said these businesses would be forced to close because there is no alternative to ethylene oxide in several cases.

The sides also differed on whether there would be medical supply shortages caused by a ban on the chemical and whether existing testing data is sufficient to accurately predict testing rates.

Industry advocates said long-term testing is needed to accurately measure the amount of ethylene oxide in the ambient air. Holmes later indicated the Illinois EPA is gathering such data throughout the state.

The industry advocates also once again argued that two measures increasing regulation on ethylene oxide emitters, which passed earlier this year, should be allowed to take greater effect before any regulations are added to the books.

While lawmakers hailed those regulations as the strictest in the nation, proponents at the committee Wednesday say they did not go far enough in limiting ethylene oxide emissions in some circumstances.

Curran, who has been a vocal opponent of ethylene oxide emissions and helped usher those bills through the Statehouse, said regardless of his bill’s movement, Illinois remains a national leader in regulating ethylene oxide.

“This legislative body, and the actions of this governor, in sealing the Sterigenics facility, got the attention of the USEPA, and more importantly the (Food and Drug Administration), and these institutions acted,” he said.

“Finally and long overdue, we have pushed past the narrative that there’s nothing to see here and that this gas does not cause cancer,” Curran said.

Representatives of Medline Industries, a Lake County company that uses ethylene oxide in medical supply sterilization, and the Illinois Manufacturers Association released statements praising legislators for not advancing the measure and calling for allowing existing regulations to take greater effect.

“As recently noted by the U.S. Food and Drug Administration, the number of facilities using ethylene oxide to sterilize medical equipment is limited and additional closures could result in years of shortages of critical medical devices,” Mark Denzler, president and CEO of the Illinois Manufacturers’ Association, said. “Illinois recently enacted bipartisan legislation imposing the toughest regulations on ethylene oxide in the nation. That measure should be allowed to be fully implemented while a comprehensive, long-term solution is explored by state and federal officials.”