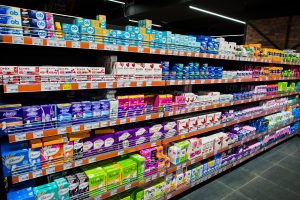 Both the House and Senate bills cite the issue of women and girls living in poverty not being able to afford products such as pads, tampons or liners to manage menstrual bleeding, as motivation for their legislation.

SPRINGFIELD – The Illinois Senate passed two bills Tuesday, May 25 that would advise state universities and colleges, as well as homeless shelters, to provide menstrual hygiene products in their bathrooms at no cost to users.

Both bill sponsors cited “period poverty,” or the issue of not being able to afford products such as pads, tampons or liners to manage menstrual bleeding, as motivation for their legislation.

Belt is the Senate sponsor of House Bill 310, which would require all shelters that provide temporary housing assistance to women and youth to make available products such as sanitary napkins, tampons and panty liners.

The bill does not include enforcement or penalties to homeless shelters that do not provide the menstrual hygiene products because the obligation of the requirement is subject to the availability of funds in the shelter’s general budget.

“It boils down to humanity and dignity of people and having access to have their basic hygiene level met,” Belt said.

HB 310 does not technically require homeless shelters to provide these products, but rather prioritizes the effort. The bill passed out of the Senate on a 56-1 vote and will await a signature from the governor to become law. 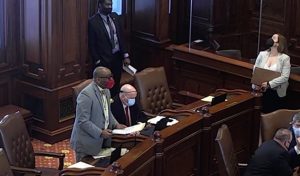 State Sen. Christopher Belt, D-Swansea, speaks on the Senate floor Tuesday, May 25 in favor of his bill to require all shelters that provide temporary housing assistance to women and youth to make available products such as sanitary napkins, tampons and panty liners, provided there is money in the budget to do so. (Blueroomstream.com)

A measure requiring universities and colleges to provide the same products as those in the homeless shelter bill received some debate on the Senate floor over cost.

“Menstrual hygiene products are essential items for a healthy and well student — having access to those products on campus is a necessity, not a privilege,” Villa said in a news release. “Period poverty should not curb a woman’s right to a proper education.”

Sen. Jil Tracy, R-Quincy, questioned the estimated cost of this proposal, but Villa said she did not have an estimate available.

Tracy said in the Senate floor debate that Southern Illinois University voluntarily offered menstrual products in its bathrooms and later recalled the program because of “rampant theft.”

“I’m all about hygiene and providing necessary items…but the experience at Southern Illinois University was that more were taken than needed,” Tracy said.

“There’s programs that we put out there that are for use, but we also generate a culture that invites taking whatever you can, whoever pays for it,” she added. “I think it’s very important that you ask the question, who pays for this?”

HB 641 would require the governing board of each public university and community college district in the state to decide funding to meet the bills requirement for free menstrual hygiene products in their facilities.

An amendment to HB 641 was made by a Senate committee to change “feminine hygiene products” to “menstrual hygiene products.” Thus, the bill will be sent back to the House for approval of the amendment before it can head to the governor for a signature.