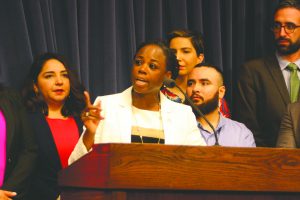 Rep. Carol Ammons, an Urbana Democrat, said the bill will not likely be passed by the end of session Friday, but she hopes it will be taken up later this year when lawmakers return for a two-week session in November. (Photo by Grant Morgan/Capitol News Illinois)

SPRINGFIELD — Without any knowledge of what was happening, Rodney Shelton, a city worker with the Chicago Fire Department, racked up almost $9,000 in non-moving vehicle tickets in less than 90 days on a car he never drove.

The fines were a result of 77 tickets given to one of Shelton’s cars that he had permanently parked at a lot after the vehicle did not pass emissions tests and he could not register it.

While the lot was not owned by the city, Shelton said he found out “you could still be ticketed if they have access, even if it’s not a city lot,” when his license was suspended and his employer began the process of firing him.

Shelton did not see previous notices of the fines because they were sent to an address where he no longer lived. By that time, late-payment penalties had ballooned the amount he owed to more than $18,000.

Shelton said when he found out, he had only 10 days to file for bankruptcy, which was the only way he could keep his license and the job that would allow him to pay off the fines. More than two years later and finally out of bankruptcy, Shelton still has about $4,000 of the fines to pay on a plan that takes $600 out of his wallet every month.

Speaking at a news conference Tuesday at the Capitol, Shelton gave only one example of how a person’s life can spiral out of control from the disproportionate consequences of minor, non-moving vehicle violations, such as unpaid parking tickets.

He was joined by several lawmakers promoting legislation that would make the Illinois secretary of state reinstate licenses to people who have committed a number of violations, including not paying parking fines, that don’t deal with driving.

The legislation would also remove language that makes the secretary of state automatically suspend licenses or revoke vehicle registrations for such violations, which happens nearly 50,000 times a year, according to the advocacy group Chicago Jobs Council.

“We’re saying to all of our cities in the state of Illinois that you can no longer use the secretary of state’s office as your collections agency. You cannot suspend a person’s license for non-payment of non-moving violations,” said Rep. Carol Ammons, a Democrat from Urbana, who is leading the charge in the House to pass the legislation.

Sen. Omar Aquino, a Chicago Democrat who filed the original legislation in the Senate, said the practice of suspending licenses for violations unrelated to driving affects minorities more than anyone else, leading to a cycle of debt and poverty from which it is difficult to escape.

“When people lose their licenses, they lose their ability to get to work,” he said.

“This should be an embarrassment to us all,” Aquino said.

Prospects for the bill’s passage before Friday’s end-of-session deadline, however, are slim. After passing its original chamber, the bill became stuck in a House gatekeeping committee earlier this month, until lawmakers called the news conference May 28.

“I would have loved to have this done by May 31,” Ammons said. “Unfortunately, there are just many, many pieces that we are trying to finish up. But we are poised to finish it this year.”

Ammons added that she hoped to get the bill out of committee by Tuesday night or Wednesday, where it could then be considered on the House floor.

“And we will come back during veto session and finish it up,” she said, referring to the two-week period in November when lawmakers come back to Springfield for a brief session.

Senate Bill 1786 has garnered dozens of sponsors from both sides of the aisle in each chamber. Not long after Tuesday’s news conference, it was assigned to a House committee on transportation, which must approve it before the bill moves to the full House.