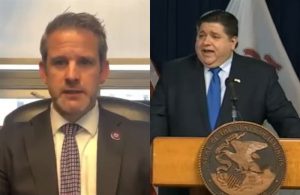 The Associated Press reported one woman was shot and killed at the Capitol on Wednesday, and members of Congress were sent fleeing as angry Trump supporters stormed the floor of the U.S. House and Senate.

“The current president incited this coup and encouraged it and did little to protect the Capitol and the Constitution,” Kinzinger said in a video posted on his Twitter account. “He is no longer the leader of our party. Our party must reject these treasonous acts.”

Pritzker, in a statement, said, “Two weeks is too long for Donald Trump to remain in office, where he can continue to incite more untold violence.”

“Because of today’s events incited by the President, I had to ask the Illinois State Police and other law enforcement resources, engaged in important life-saving missions, to redeploy to heighten their presence at government buildings and the Capitol in Springfield,” Pritzker added.

Kinzinger said on Thursday morning (Jan. 7) that it was time to invoke the 25th Amendment of the U.S. Constitution.

The amendment involves the process to remove the president from his duties. It states: “Whenever the Vice President and a majority of either the principal officers of the executive departments or of such other body as Congress may by law provide, transmit to the President pro tempore of the Senate and the Speaker of the House of Representatives their written declaration that the President is unable to discharge the powers and duties of his office, the Vice President shall immediately assume the powers and duties of the office as Acting President.”

A small group of 75 to 100 protestors demonstrated peaceably Wednesday outside of the Illinois State Capitol, a far cry from the events in Washington, D.C.

“As the heart of our democracy was under siege and blood was literally being spilled in our most sacred halls, Donald Trump was praising the attackers. There are real questions about what efforts the president made to protect our Congress or what obstructions he committed that has prevented the ending of the siege,” Pritzker said in the statement.

Trump, in a video statement released on the afternoon of Jan. 6, urged the rioters to go home while still incorrectly maintaining the election was “stolen” by Democrats. Trump has filed several lawsuits alleging voter fraud, repeatedly being rejected by judges for lack of evidence.

Trump also praised the rioters in the video statement, calling them “very special” and telling them he loved them.

On Twitter, the social media platform began removing some of the president’s tweets after he criticized Vice President Mike Pence for not being more proactive in blocking the results of the November election. On the evening of Jan. 6, Twitter placed a 12-hour block on his account, noting it would continue until certain tweets deemed a threat to public safety were removed.

Several Republican members of Congress planned to object to Biden’s certification Wednesday before it was waylaid by the rioters.

“There is no doubt in my mind that his efforts to encourage a coup represent high treason to this democracy, our Constitution and all Americans,” Pritzker said in his statement. “He poses a danger to our nation. He must be impeached and removed from office immediately. And every person in a position of public trust, elected or otherwise, who enabled the systematic dismantling of our democratic norms and failed to speak up or take action bears some responsibility for the culmination of four years of spreading bile.”

Legislative Republicans in the state also rebuked the events in Washington.

“The events unfolding at the United States Capitol today, and the inflammatory remarks by members of the Republican Party, are a disgrace to the core values and beliefs of our great nation,” House Republican Leader Jim Durkin, R-Western Springs, said in a statement. “These actions do not represent our Republican Party, and are against everything we stand for as Americans. I am sickened and deeply saddened by what I have witnessed today. Any public officials who condone these actions have no place in the Republican party or in our democracy.”

“The horrible violence at our nation’s Capitol is a disgrace to all Americans,” McConchie said. “This violence does not reflect the United States that generations of Americans have fought so hard to build. I stand with members of all parties in condemning these un-American acts of violence and treachery, and will do my part here in Illinois to repair the devastating divide that has been created in our country.”

“The peaceful transition of power is a hallmark of our great democracy,” Harmon said. “To disrupt that transition is an affront to the very fabric of the United States of America. The U.S. Capitol has stood strong in the face of attacks by confederates and terrorists. We will survive today’s sad acts to once again be a beacon of hope, change and equality for the world.”