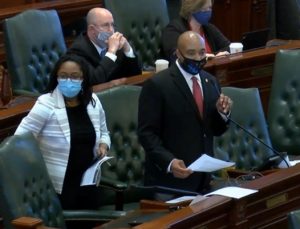 Chicago Democratic Rep. Justin Slaughter introduces a bill Saturday, May 29 that would outlaw the use of deceptive interrogation techniques on minors. (Blueroomstream.com)

SPRINGFIELD – The Illinois House unanimously passed a bipartisan juvenile justice reform Saturday, May 29 that outlaws the use of deceptive interrogation techniques on minors.

The measure, contained in amendments to Senate Bill 2122, makes confessions by minors in custody inadmissible if they were obtained by “a law enforcement officer or juvenile officer (that) knowingly engages in deception.”

The bill was introduced in the House by Chicago Democratic Rep. Justin Slaughter and was also sponsored by two Republican former prosecutors, Minority Leader Jim Durkin of Western Springs, and Rep. Patrick Windhorst of Metropolis.

“There have been a hundred wrongful convictions in Illinois predicated on false confessions, minors make up 31 of these cases. Research, experience and common sense tell us that minors are between two and three times more likely to falsely confess the crimes they didn’t commit,” Slaughter said.

Durkin praised Slaughter for negotiating with Republicans and law enforcement and securing the support of the Illinois Association of Chiefs of Police and the Illinois State’s Attorneys Association.

“Coercion has no place within our criminal justice system, particularly with juvenile defendants,” Durkin said while urging support for the legislation.

Durkin said he was initially skeptical of the legislation but was moved toward supporting it after speaking to legal experts from the Innocence Project. According to Durkin, what finally put him over the edge to sponsor the bill was learning about the case of Brendan Dassey while watching the Netflix series “Making a Murderer.”

Slaughter pointed to the case of Terrill Swift, one of the Englewood Four, who was released in 2012 after serving 15 years in prison after it was determined his confession as a 17-year-old minor was coerced by Chicago police officers.

That confession had led to his conviction despite no evidence tying him to the crime committed, and the city paid Swift nearly $7 million in a settlement following his release. 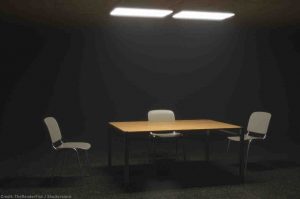 “Coercion has no place within our criminal justice system, particularly with juvenile defendants,” Minority Leader Jim Durkin of Western Springs said while urging support for the legislation.

“There are two other critical issues that we’re addressing with this bill,” Slaughter said. “First of all fiscal responsibility — the Englewood Four case cost our state taxpayers over $30 million. This is one case, the civil settlements are costing our state millions and millions of dollars and also on top of that, taxpayers are paying unnecessary costs for incarcerating individuals that are innocent.

“Secondly, I really wanted to touch on public safety and when we talk about criminal justice reform, sometimes this does get lost. When we incarcerate the wrong individual, the actual offender is still out in the community.”

The measure passed the House in a 114-0 vote. While SB 2122 also passed the Senate last month, a new amendment in the version the House approved May 29 requires it be sent back to the Senate for another vote.

The House also passed a sentencing reform bill along partisan lines. Senate Bill 2129 allows the State’s Attorney of a county where a defendant was sentenced to file a motion to resentence that individual if their original sentence “no longer advances the interests of justice.”

The new sentence cannot be greater than the one originally handed down by the court and is meant as a rehabilitative measure.

The reform is meant as a way to address historically punitive sentences against crimes and circumstances that may be considered for more lenient punishment today with advances in understanding around socioeconomic contributors to violence and crime.

It passed the House in a partisan 61-48 vote and now will head to Gov. J.B. Pritzker for his signature after passing the Senate last month in a partisan 31-17 vote.