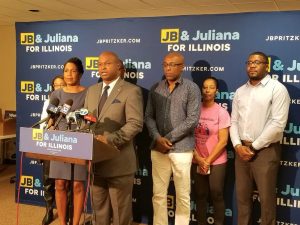 Welch said Friday (June 22) at a press conference with other black legislative leaders that the governor is pandering to conservatives in the Illinois Republican Party, maligning the effectiveness of black lawmakers “by blowing his racist dog whistle.”

On June 20, Rauner said on a Chicago radio show that he has done more than anyone for the black community, a comment that angered black lawmakers.

On a Springfield radio show Friday, Rauner fueled the fire even more saying, “I’m not surprised they’re sensitive. Black legislators have really not been serving their community very well. They’ve been too loyal to (House Speaker) Mike Madigan and his machine. The reality is the black community has been suffering in Illinois under the policies of Madigan’s majority for decades: high unemployment, high taxes, lack of economic opportunity and lack of educational opportunity.

“In my administration, I’ve tried to blow up that system and transform it. We’ve created more academic equality and excellence than any other governor. We’ve achieved it with our new education-funding formula, more equity, more money for low-income schools and poor school districts to increase their school quality. Historic change there and record funding for K-12 schools. We’ve also transformed the criminal justice system which too often has been biased against African-Americans.”

He said his administration has done much to cut red tape and regulations, giving black businesses “a real shot” at getting state contracts.

“We haven’t just talked about it; we’ve done it,” Rauner said.

State Rep. Juliana Stratton, who is running for lieutenant governor on the ticket with Democratic gubernatorial candidate J.B. Pritzker, said Rauner is following white men of privilege throughout history who have told people of color “that they know better than we do.”

“For this governor to have the audacity to think he knows better than us, to swoop in four years too late, to tell us what we need, to think that he and only he can save us, it’s not just offensive, it’s wrong,” Stratton said. 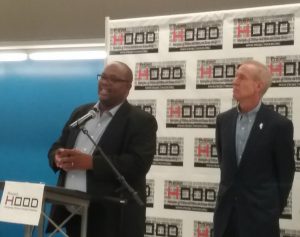 The Rev. Corey Brooks talks last fall about the high hopes he has for a new business center in Chicago’s Woodlawn neighborhood as Gov. Bruce Rauner looks on. Rauner says he has done more for the black community than anyone else and questioned the effectiveness of black legislative leaders. (Chronicle Media file photo)

“You do not get to speak for us, Bruce Rauner, after calling our schools ‘crumbling prisons’ and vetoing their funding. For four years, we have been ignored, divided and left behind by Bruce Rauner. Black communities have been plagued with violence as Bruce Rauner vetoes common-sense gun legislation. Black women make 63 cents on every dollar that a white man makes while this governor stands in the way of equal pay.”

Stratton said that black communities have felt the most pain from Rauner’s failures.

“We’re not sensitive; we’re furious,” the Chicago Democrat said in response to Rauner’s radio comments. “We can speak for ourselves. We can represent our own communities … We’re motivated as hell.”

State Sen. Kwame Raoul of Chicago, the Democratic nominee for Illinois attorney general, said that Rauner’s comment were not only offensive to legislators of predominantly black areas, but to the residents of those areas as well.

The state senator added that, on the other hand, the governor had no problem in taking credit for legislation, such as education funding, worked on by black lawmakers.

“In the same breath, he took credit for work those same individuals did in Springfield,” Raoul said.