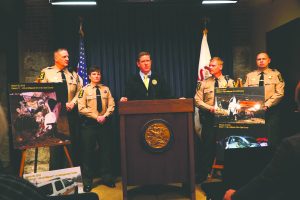 Byrd testified the evening of May 20 on a recent House amendment made to Senate Bill 1862, which would create the Scott’s Law Fund. According to the bill, the fund would be used to produce materials related to educating drivers “on approaching stationary authorized emergency vehicles.”

He said it’s been a difficult year for the Illinois State Police, which has had to deal with the deaths of Troopers Brooke Jones-Story, Jerry Ellis and Chris Lambert in the first five months.

“And this is more of a situation where we have to educate the public,” Byrd said. “And we’re trying to change driving behavior. That’s what we want to do.”

Two of the three troopers died in incidents where there was a violation of Scott’s Law, named after Gillen and sometimes referred to as the “move-over law.” It requires a motorist to slow down while passing stationary vehicles with flashing lights and, if safe, change lanes.

The increased focus on Scott’s Law this year has lawmakers pushing for steeper penalties.

The measure dictates the money collected be used to educate drivers on how to comply with Scott’s Law.

The bill’s House sponsor, Democratic Rep. Marcus Evans, of Chicago, said drivers aren’t being “vigilant” when it comes to approaching first responders on roadways. But he said enforcement alone won’t usher in the change that’s being sought.

“From my understanding, it’s not just fine more; we need to educate drivers to eliminate these tragedies,” Evans said.

Byrd said changing driving behaviors can be accomplished over time through educating the public and enforcing Scott’s Law.

“Believe me, Illinois State Police would prefer to be spending their time working on some more serious crimes,” Byrd said. “But until we change that behavior, this has to be put to the forefront.”