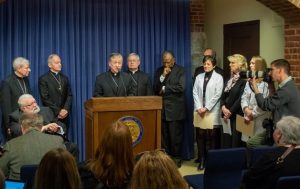 Cardinal Blase Cupich and other high-ranking officials from the Catholic Church are pictured at the Illinois Statehouse in 2019. They released a letter this week calling on Catholics to opposed a proposed tax change to the scholarship program used to help Illinoisans attend private schools. (Capitol News Illinois file photo)

SPRINGFIELD – The Catholic Conference of Illinois is lobbying against proposed tax changes for the 2022 fiscal year that would reduce an income tax credit gained for donations to private scholarships.

In a letter released Tuesday, May 4, Cardinal Blase Cupich of the Archdiocese of Chicago joined bishops representing the state’s other five dioceses — administrative districts under the Catholic Church — asking Catholics to call their local legislators and ask them to oppose the measure put forward by Gov. J.B. Pritzker, which they called “an important matter of public policy and social justice.”

The governor’s February budget outline for FY 2022 proposes nine policy changes to the corporate tax code. One of these changes applies to both businesses and individuals: a reduction to the state income tax credit gained for donating to an approved scholarship granting organization.

The scholarship granting organization must provide tuition to children of families whose income is at or below 300 percent of the federal poverty level for that census tract area. Many of the scholarships go toward the private tuition of Catholic educational institutions in the state.

“We ask you to simply call your state legislators and urge them to oppose the Governor’s plan to cut the Invest in Kids program and instead support efforts to extend and improve the Invest in Kids Scholarship Tax Credit,” the bishops said in the letter.

That law was originally put into place as part of the Invest in Kids Act during budget negotiations under Republican former Gov. Bruce Rauner in 2017. It was part of the package creating an evidence-based funding formula to overhaul the way the state funds public schooling.

Pritzker has received criticism from business leaders and Republican lawmakers for referring to his suggested tax changes as “closing corporate loopholes,” since they were originally implemented as deliberate policy changes under previous governors or Pritzker himself.

The governor has promised to balance Illinois’ budget for the upcoming fiscal year while keeping income taxes and government spending flat.

Estimates from the Illinois Department of Revenue and the Governor’s Office of Management and Budget say the budget plan, if enacted, would result in a $120 million surplus by the end of the fiscal year.