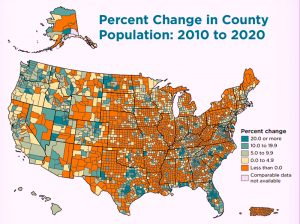 SPRINGFIELD – Nearly every county in Illinois lost population over the past decade, mirroring a national trend of greater concentrations of people leaving rural areas and moving to larger metropolitan areas.

That’s according to the latest numbers released Thursday, Aug. 12 by the U.S. Census Bureau showing detailed population numbers from the 2020 census for cities, counties and small geographic areas.

In April, the Census Bureau released statewide numbers that determine how many congressional seats and Electoral College votes each state receives. That report showed Illinois’ overall population had shrunk by 18,124 people, to a little more than 12.8 million.

That was a much smaller decline than many people had expected, but it did result in Illinois losing one congressional seat, meaning there will be only 17 districts instead of 18 when the 2022 elections are held.

The new data released Aug. 12 shows in much greater detail exactly where the population changes occurred. Those numbers are intended to be used to redraw congressional and state legislative district lines so that all residents are represented as equally as possible in both state and federal governments.

But the data also has a number of other purposes beyond local representation in government.

“Results from the 2020 census will be used for the next 10 years to shape the future of our country,” Acting Census Bureau Director Ron Jarmin said during a video news conference. “Local leaders can use this data to make decisions such as where to build roads and hospitals, and how to help our nation recover from the pandemic. These results will also help inform how hundreds of billions of dollars in federal funds will be distributed each year nationwide.”

The data were released in what the Census Bureau calls its “legacy format,” meaning it can be read only in sophisticated programs that are used mainly by academics, government officials and others who work with large databases. It was distributed to state officials and legislative leaders in all 50 states, the District of Columbia and Puerto Rico.

But some of the summary data that was released showed the broad trends.

For example, all 10 of the largest cities in the United States gained population since the 2010 census. That includes Chicago, which grew by a little less than 2 percent.

Nationally, the areas with the most growth areas were located in the southern and western portions of the country. But more than half of all counties in the U.S. saw population declines. 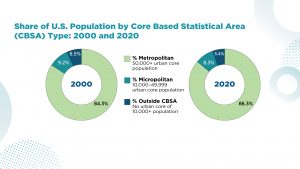 By 2020 the proportion of the U.S. population in metro areas increased to 86.3%, while it decreased in both micro areas and in areas outside of metro and micro areas.(U.S. Census Bureau)

Within Illinois, Cook County and its surrounding collar counties all grew by less than 5 percent. The same was true for Carroll County in northwestern Illinois, McLean and Champaign counties in central Illinois, and Effingham and Williamson counties in southern Illinois.

Grundy County, on the southwest edge of the Chicago metropolitan area, was the fastest-growing county in the state at over 10 percent. And Johnson County in southern Illinois had a growth rate between 5 and 10 percent.

Also in 2020, the Census Bureau refined the way it tracks race and ethnicity. That information is also important for redistricting in order to prevent minority populations from being broken up or diluted among districts, or from being overly concentrated in too few districts.

People who identify themselves as white continue to be the largest racial group in the country at 61.6 percent of the population, while people who identify as white alone or in combination with some other race make up 71 percent.

People of Hispanic or Latino origin make up the largest ethnic minority group in Illinois at 18.2 percent, or just over 2.3 million people.

Blacks make up 14.1 percent of the Illinois population, higher than the national average of 12.4 percent, while Asian Americans make up 5.9 percent and 8.9 percent identify as being from two or more races. 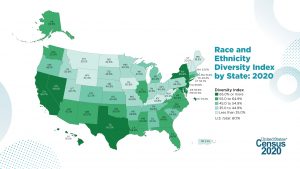 The Census Bureau also developed what it calls a “diversity index,” which attempts to measure how racially diverse a given population is. It is based on the probability that any two people chosen at random from the population would be from different races.

Illinois’ diversity index was listed as 60.3 percent, which is just below the national average but still in the second-highest quintile of states. Hawaii was ranked as the most diverse, with an index value of 76 percent, while Maine was the least diverse, at 18.5 percent.

The release of 2020 census data was delayed by several months, due in large part to the COVID-19 pandemic. The Illinois General Assembly, however, redrew state legislative and appellate court district lines anyway, using population estimates based on survey data from the Census Bureau.

Those new maps are now the subject of two federal lawsuits by Republican leaders in the legislature and the Mexican American Legal and Defense Educational Fund that are pending in the Northern District of Illinois.

But lawmakers delayed redrawing congressional district maps pending the release of the official census data while also pushing back the 2022 primary elections to July instead of March. Now that the official data is available, that remapping process is expected to begin soon.