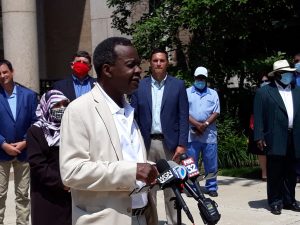 State Rep. Darren Bailey, R-Xenia, readily admits there are things in the proposed state reparations bill that he is not sure he can support, but he is willing to talk about them.

And that is good enough for Chicago businessman and humanitarian Willie Wilson. The businessman convened a bipartisan meeting of elected officials, and faith and community leaders to discuss reparations for descendants of slaves.

“We were very pleased with our day together,” Wilson said following the June 22 luncheon and meeting at Philadelphia Romanian Church on Chicago’s North Side. “There was an excellent and frank exchange of ideas and discussion about the future.

“We all agreed that what we have in common is greater than our differences and dialogue is certainly the path to a strong future, together. We have been in touch several times since this meeting, discussing ideas and are planning another session in southern Illinois.” 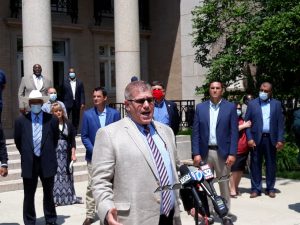 Davis has introduced a bill in the General Assembly calling for creation of a commission to examine giving money to the descendants of slaves to lift them out of poverty. A similar measure has already passed the Chicago City Council; and Evanston plans to use city taxes from marijuana sales to provide reparations to residents.

Wilson said the vestiges and scars of slavery remain in American society today.

“America is at a crossroads with respect to race, inequality in health care, housing, education, criminal justice and contracting for descendants of slaves,” Wilson said. “Largely, African Americans are trapped in inescapable poverty that limits their upward mobility in society. Since the Emancipation Proclamation became law in 1863, descendants of slaves have been fighting for equality and parity. A promise of 40 acres and a mule to compensate for years of free slave labor and abuse never materialized.”

Attorney Richard Boykin said that reparations would help to curb the epidemic of gun violence that has plagued Chicago. 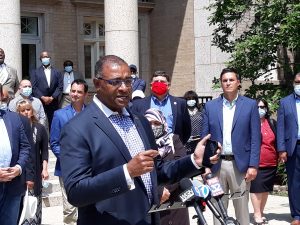 Attorney Richard Boykin talks about the importance of reparations and it giving descendants of slaves more opportunities.

“Descendants of slaves have not been given the same opportunities (as whites),” Boykin said. “They have been overlooked. That’s why things have gotten out of control for the city of Chicago and the state of Illinois.”

Boykin said racial inequity is something that needs to be addressed.

“It’s an issue we all agree on,” Boykin said. “No American person should be left behind.”

State Rep. Bailey said after Willie Wilson drove downstate to talk with him about the proposed reparations bill, he felt it only right to return the favor and attend a meeting to further talk about the proposal.

The Xenia state rep, who will become a state senator in January, said he was happy the gathering was conducted in a church.

“The church can make a difference in the state and the country,” Bailey said.

State Rep. Bryant, who spent 20 years working in correctional institutions, said there are some serious challenges to address in criminal justice reform. 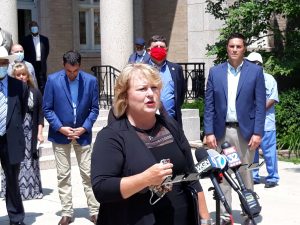 She said there is a difference in criminal justice ideas between the northern and southern parts of the state.

“In southern Illinois, we like our guns,” Bryant said.

Like Bailey, she said there were parts of the reparations bill she was not sure she could support but wanted to hear from Wilson and community leaders on the proposal.

“We need to keep working through this,” said state Rep. Wilhour. “Doing that brings hope. I look forward to the conversations.”