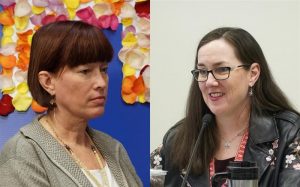 Sen. Heather Steans (left), D-Chicago, will resign from the state Senate at the end of the month. Rep. Kelly Cassidy (right), D-Chicago, announced she will seek to replace her. (Photo by Lee Milner, Illinois Times)

SPRINGFIELD — Sen. Heather Steans, a Chicago Democrat, plans to resign at the end of the month, after a 12-year tenure in the Illinois Senate.

“It’s been the privilege of a lifetime to represent the most diverse Senate district in the State of Illinois,” Steans said in a written statement issued Tuesday, Jan. 19.  “I’ve benefited tremendously from the many perspectives of the people a I’ve represented.  We’ve made great progress together, and now it’s time to pass the baton.”

Steans, as chair of the Senate Appropriations Committee, was deeply involved in budget matters. She was a key player in crafting the cannabis legalization law, and had important roles in advancing legislation to protect abortion rights and to expand the Affordable Care Act in Illinois.

Steans, 57, has not revealed her next move, but her statement mentions she will continue to support the efforts of citizen-activists after leaving the Senate.

Senate President Don Harmon said in an emailed statement that Steans has forever changed the state for the better.

“People across Illinois had their rights recognized and protected thanks to her leadership. She is a forceful advocate for progress and problem solving, who fearlessly tackled many of the biggest issues in our society and was always looking for her next challenge,” Harmon, a Democrat from Oak Park.

Executive director of the American Civil Liberties Union of Illinois Colleen Connell, in a statement, hailed Steans’ support of issues such as advancing marriage equality for same-sex couples and implementing protections from religious discrimination in health care.

“Senator Steans has been a leader for progress in Illinois and her voice in the Senate will be missed,” Connell said in the statement.

Her successor will be appointed to serve for the two years remaining in her term by a weighted vote of the Democratic committeemen and committeewomen from the Chicago wards that comprise the 7th Senate District, which Steans’ represents.

Rep. Kelly Cassidy, a Chicago Democrat whose House district is within Steans’ Senate district, confirmed to Capitol News Illinois that she intends to seek the appointment.