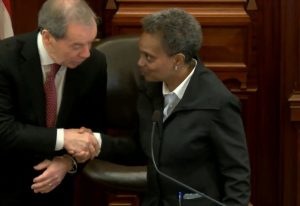 Chicago Mayor Lori Lightfoot shakes hands with Senate President John Cullerton, a Chicago Democrat, after addressing the state Senate on April 11 at the Capitol in Springfield. During her budget address Oct. 23, Lightfoot said the city will need help from lawmakers in Springfield for Chicago to fill its operating deficit. (BlueRoomStream)

Lightfoot called on state lawmakers to authorize the city to increase its real-estate transfer tax, “support a Chicago casino” and “develop a statewide pension reform package.”

The mayor claimed that, “for the first time in our city’s history,” the budget will include full funding for police and fire pensions “at the level outside experts say we should be paying for them to ensure their long-term financial stability.”

The long-term prospects of meeting those responsibilities, however, will depend on the state, Lightfoot said.

“And if we are able to work with Springfield to approve these two measures, Chicago will have all four of our pension funds reach that level and be on the path to structural balance by 2022. That is good news,” she said. “But if we don’t get the authorization we need, we will be forced to make more painful choices when it comes to new sources of revenue. And we all know what those choices are.”

According to Lightfoot’s budget proposal, pension appropriations will increase to $1.7 billion from the proposed local fund operating budget in 2020, an increase of $346.8 million from the 2019 budget.

The city has an unfunded pension liability of about $28 billion. That is separate from the state’s unfunded liability, which sits at more than $130 billion.

While details of a “statewide pension reform package” remain murky and yet to be negotiated, Emily Bittner, spokesperson for Democratic Gov. J.B. Pritzker, said the governor encourages dialogue on the city’s proposals.

“Cities around the state face enormous fiscal challenges, and the governor believes that balancing Chicago’s budget is an important step in stabilizing our overall fiscal health to benefit all our state’s residents,” she said. “The governor will encourage the General Assembly to give the mayor’s proposals their full consideration during the veto session.”

Lightfoot is also seeking changes to the existing tax structure that would govern a new Chicago casino among other possible changes.

A feasibility study released earlier this year said the tax structure approved in the gambling expansion bill is “very onerous” and would create an effective tax rate of approximately 72 percent for the casino operator.

Earlier this week, Pritzker Press Secretary Jordan Abudayyeh said the governor was willing to work with the city on that issue is as well.

“After the casino feasibility study was released in mid-August, the governor was willing to give the new city administration time to develop alternative proposals for the Chicago casino,” she said. “The governor remains open to a number of approaches for making the Chicago casino successful, and we look forward to working with the General Assembly during veto session.”

Lightfoot said Chicago will also need approval from Springfield in reforming Chicago’s real estate transfer tax, which applies to anyone selling or buying a home in the city.

In all, the proposed operating budget spends $11.65 billion. The proposal does not include property tax increases, but it does include one-time savings from restructuring city debt, increased taxes on rideshares and all food and drinks sold in Chicago restaurants and increased fees on downtown parking meters.

Lightfoot also said her budget accounts for $150 million in savings obtained through “zero-based budgeting,” which she called a budgeting approach built “from the ground up, ensuring every line was essential to the core service mission of every department.” She did not elaborate on where those savings would be realized.

Veto session runs Oct. 28-30 and Nov. 12-14 and is the first time the General Assembly will be in session since they adjourned in early June.

Lightfoot’s budget is also subject to debate and changes from the Chicago City Council.