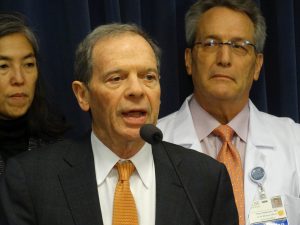 Senate President John Cullerton speaks during a news conference May 7 at the Capitol in Springfield about his support for a $1-per-pack tax increase on cigarettes in Illinois. Standing with Cullerton is Dr. Douglas Carlson with the Illinois Chapter of the American Academy of Pediatrics. (Capitol News Illinois photo by Rebecca Anzel)

The first wave of tax increases that will pay for the state’s $45 billion capital infrastructure plan will take effect Monday, July 1.

The most direct tax for consumers will be the 19-cent increase to the motor fuel tax which will help fund $33 billion in spending on transportation projects such as road and bridge repairs and public transit.

Going forward, the motor fuel tax will increase annually by the consumer price index, which is usually close to 2 percent, but would be capped at a 1 cent per-year increase.

The gas tax increase and $45 billion infrastructure plan drew bipartisan support in both houses, including from Republican state Rep. Margo McDermed of Mokena.

The gas tax increase and $45 billion infrastructure plan drew bipartisan support in both houses, including from Republican state Rep. Margo McDermed of Mokena.

“The capital plan does contain additional sources of revenue, but it is necessary long-term sustainable funding that will help us avoid the peaks and valleys of intermittent funding, which leads to starts and stops on projects our communities are counting on,” McDermed said in a news release. “Further, people who drive on our roads every day are paying for it, they just don’t realize it.” 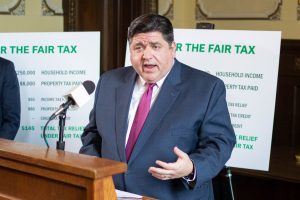 An independent report by TRIP, a national transportation research group, said repair, safety and congestion caused by poor infrastructure was costing Illinois drivers anywhere from $1,300 to $2,600 annually depending on where they live.

The motor fuel tax increase is expected to bring in about $1.3 billion in added infrastructure funding, while other fee increases for licenses and registrations will not take effect until Jan. 1.

In Illinois, state and local sales taxes are also applied to gasoline purchases, and Senate Bill 1939 will shift 1 percent of the state’s proceeds from that tax to the road fund annually beginning July 1, 2021.

According to a study of the overall gas tax rates in each state conducted by the Tax Foundation, a non-profit research group, Illinois would move from 10th overall to second when compared to other states’ July 2018 numbers. Including state and local excise taxes, the state’s per-gallon rate would move to 56.32 cents per gallon, according to the study, which would put Illinois behind only Pennsylvania, which sits at 58.7 cents per gallon.

Also starting July 1, the tax on a pack of cigarettes will increase to $2.98, up from $1.98, while a separate state law would prevent anybody under the age of 21 from purchasing cigarettes. The tax increase is expected to generate about $159 million in revenue for the next fiscal year, all of which would go to the capital infrastructure plan. 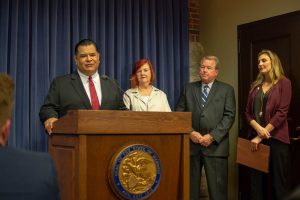 Democratic state Sen. Martin Sandoval, of Chicago, is joined by Republican state Rep. Margo McDermed, of Mokena, and Republican state Sen. Don DeWitte, of St. Charles, at a news conference May 15 at the Capitol in Springfield advocating for greater infrastructure spending on roads and bridges. (Capitol News Illinois photo by Jerry Nowicki)

Senate President John Cullerton, a Chicago Democrat who was one of the main supporters of the steep cigarette tax increase, said the tax hike was one supported by and beneficial to the public.

“Many of the bills that we vote on in Springfield deal with money and in fact, I would say most of them do. Since I’ve been here, the bills that I’ve been most interested in working on are bills that you can vote on where you actually save lives,” he said when introducing the hike. “This is another example of that.”

Senate Bill 690, which laid out a massive statewide gambling expansion, included the cigarette tax language and also defined electronic cigarettes such as e-cigars, vapes and hookahs as “tobacco products.” This will allow the state to charge a 15 percent wholesale tax on these products beginning July 1.

According to the Commission on Government Forecasting and Accountability, per-pack cigarette taxes in most neighboring states are lower than they are in Illinois: 99.5 cents in Indiana, $1.10 in Kentucky, 17 cents in Missouri and $1.36 in Iowa. The new tax will also put Illinois ahead of Wisconsin, which charges $2.52 per pack.

The tax rate on other tobacco products such as cigars, chewing tobacco and snuff will remain the same at 36 percent wholesale.

While supportive lawmakers have touted the economic benefits of a robust capital infrastructure plan, opponents such as Bill Fleischli, executive vice president of the Illinois Petroleum Marketers Association-Illinois Alliance of C-Stores, said in a statement the tax increases could have far-reaching negative effects.

“Raising taxes on both gas and cigarettes at the same time is an enormous hit for consumers and will prove disastrous for businesses across Illinois, particularly those along our borders,” he said. “Over the past five years, Illinois has lost 700 gas stations and has seen a reduction of 9,000 employees in the industry. These increases will only result in more stores having to close, fewer employment opportunities, and less revenue for the state as a whole.”