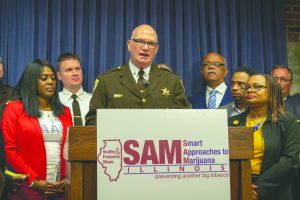 Bruce Kettlekamp, Christian County sheriff, speaks against Senate Bill 7, which would legalize recreational marijuana in Illinois. Kettlekamp joined a coalition of advocacy groups that argued against the bill on Wednesday during a news conference at the Capitol in Springfield. They say the legislation would commercialize cannabis and increase addiction. (Photo by Jerry Nowicki/Capitol News Illinois)

SPRINGFIELD — A coalition opposed to recreational marijuana legalization shared concerns about public safety effects they say will result if the measure before the Illinois Senate becomes law.

The Smart Approach to Marijuana coalition, which spoke at an Illinois Statehouse news conference Wednesday, May 8 included police chiefs, sheriffs, representatives of the NAACP, the Catholic Conference of Illinois and other advocacy organizations.

They warned that “commercialization and normalization” of marijuana resulting from the language in Senate Bill 7 could lead to increased usage and more instances of people driving under the influence.

“We’re concerned about mainly two things: The addictive potential of recreational marijuana, as well as the questionable wisdom of the state commercializing a drug into an industry that will profit from it,” said Bob Gilligan of the Catholic Conference of Illinois.

Gilligan said proponents are incorrectly categorizing legalization as a social justice issue, and he noted language to expunge the records of people charged with marijuana offenses could be filed independently of the legalization bill.

“You’re creating an addiction; you’re adding to an addiction that’s already out there that’s illegal and you’re making it legal and more people are going to suffer,” Haley said. “Again, rich people are getting more rich on the backs of poor people.”

Des Plaines Democratic Rep. Marty Moylan urged his colleagues to oppose the legalization effort, framing it as a “David vs. Goliath” fight against big money. He likened the marijuana industry’s push for legalization as “another big tobacco.”

“I’m trying to protect everybody in the state of Illinois from having this bill passed,” Kettelkamp said.

Law enforcement also opposed a measure which would allow a person to possess five home-grown marijuana plants, claiming it “invites foreign cartels, drug traffickers and organized crime to move into neighborhoods and has proven to be a disaster in other states.”

Andy Duran, executive director of Linking Efforts Against Drugs, said the bill as it stands is about profits.

“What we’re really talking about is the creation of a fully commercialized industry that is incentivized to sell as much marijuana as it can,” he said. “If this were truly a bill about public health, creating an industry of addiction profiteers would be strictly off the table.”

Duran, whose organization works to fight youth addiction, said the state could take a position between prohibition and commercialization, and he noted he was not opposed to decriminalization or medicinal marijuana programs.

Amendment 1 to Senate Bill 7 was officially filed Monday and it awaits action in the Illinois Senate.