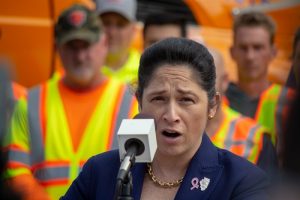 Illinois Comptroller Susana Mendoza is pictured at an event in 2019. She is the subject of a lawsuit by former state lawmakers who are seeking backpay for automatic raises that were withheld when they were in office. (Capitol News Illinois file photo)

SPRINGFIELD — Two former Illinois state senators have a “clear right” to receive portions of their legislative salaries that were withheld by Illinois Comptroller Susana Mendoza and her predecessors, a Cook County judge decided last week.

But Mendoza said she intends to appeal the ruling, meaning this latest development is likely not the last word in the case brought by former Democratic Sens. Michael Noland from Elgin and James Clayborne Jr., from Belleville.

Judge Allen Walker’s decision found that Noland and Clayborne are entitled to the salaries that were withheld when the legislature passed laws to freeze cost-of-living increases and implement furlough days.

Walker’s ruling was based partly on a July 2019 decision in this case that found those laws were unconstitutional because the laws altered wages during terms for which the lawmakers were elected.

“(P)er the July 2, 2019 Order, this (c)ourt held that (Noland and Clayborne) were entitled to a clear right to receive wrongfully withheld portions of salaries, as the relevant statutes in this case are facially unconstitutional,” Walker’s eight-page ruling states. “Therefore, the (c)ourt finds that (Noland and Clayborne) have established a clear right.”

The ruling issued Thursday is a victory for Noland and Clayborne, who sued the state comptroller over unpaid wages resulting from those laws, which were passed between 2009 and 2017. Noland first sued in June 2017 and Clayborne was added to the lawsuit in May 2018.

In a written statement, Mendoza said she “respectfully” disagrees with Walker’s decision and intends to appeal to a higher court “so I can continue to defend taxpayers’ interests against this brazen money grab.”

She also noted that Noland and Clayborne voted in favor of the laws to forgo pay increases prior to challenging their legality in court.

“Now that they are out of office, these shameless grifters want the courts to reverse their votes, reaching into taxpayers’ pockets to give them those retroactive raises,” Mendoza’s statement read. “Taxpayers already paid their salaries and are on the hook for potentially millions of dollars for these two men’s pensions. Greed and Gluttony are sins. The former senators should end their shameless crusade to take from taxpayers the raises they voted to decline.”

Although Walker found Noland and Clayborne can seek their withheld salary, he ruled that this finding does not apply to all members of the Illinois General Assembly whose salaries were withheld.

He based this finding on the fact that no other members of the legislature were named in this lawsuit, and both former Senators brought this case as individuals, not in their official capacity as lawmakers.

Lawyers for Mendoza argued that the lawmakers’ case was barred by the five-year statute of limitations that applies in most civil cases. They claimed Noland should have filed his lawsuit before June 2012, and Clayborne’s claims should have been brought before May 2013.

They also argued that Mendoza has discretion to determine when these salaries are to be paid and that since the potential payments could be significant, she should have discretion to prioritize the payments of the state’s debts.

Specifically, they pointed to the language in the state constitution that the comptroller “shall maintain the State’s central fiscal account, and order payments into and out of the funds held by the Treasurer.” The words “shall maintain” indicate discretion to the comptroller, Mendoza’s lawyers argued.

Walker disagreed with both points.

He ruled that the lawsuit from Noland and Clayborne is not time barred because the statute of limitations in this case began to accrue in July 2019, when the laws were found unconstitutional, and not when the relevant laws took effect.

He also ruled that the phrase ‘shall maintain’ is a “specific instruction” that is “contrary to the idea that the (comptroller) has discretion in determining when these payments are to be made.”

He did not respond to requests for comment by deadline.