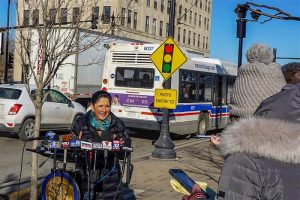 Illinois Comptroller Susana Mendoza (D-Chicago) announces at a news conference on a Chicago street corner that her office will end its participation in the collection of red-light camera fines next month. (Illinois Comptroller’s Office photo)

SPRINGFIELD — Pressure is mounting on red-light camera operators as Democratic Illinois Comptroller Susana Mendoza announced Monday that, beginning Feb. 6, her office will no longer assist municipalities in collecting fines for violations caught by the devices.

“Over the years, it has become clear that these red-light cameras were less about keeping people safe and more about collecting revenue,” Mendoza said in a street-corner Chicago news conference overlooked by a red-light camera.

The cameras are automated devices that photograph vehicles if they pass through a red light without stopping, and generate a citation to the vehicle’s owner. Local governments typically split the revenue from citations with vendors that place the cameras.

“They were sold as a way to prevent motorists from racing through the intersections, but the stories have shown they are now more about charging people high fines for failing to come to a complete stop as they make a right turn on red at intersections where right turns on red are allowed,” Mendoza said.

Historically, this system had been used to collect child support, overpayment of benefits and other types of debt, the comptroller’s office said.

The comptroller’s office said it does not collect red-light camera fines for Chicago, but a growing percentage of offset collections have involved violations from the city’s suburbs. Beginning Feb. 6, that arrangement, which Mendoza called “plain rotten,” will end.

“It exploits taxpayers and especially those who struggle to pay the fines imposed, often the working poor and communities of color,” she said.

Beyond that, red-light cameras have been a source of public corruption and FBI scrutiny, the comptroller said.

When federal agents in September raided the Statehouse office of former Sen. Martin Sandoval (D-Chicago), they were looking for information on SafeSpeed LLC, a politically-connected red-light camera company based in Chicago.

The company has been named in several other news reports regarding the ongoing federal corruption probe of several Statehouse insiders and local government officials, although its CEO denied any wrongdoing from the company in an interview with the Chicago Sun-Times in October.

In a news release, Mendoza urged municipalities to “take a second look at any contracts with red-light camera companies and determine if those contracts were procured properly in light of recent news reports and criminal investigations concerning the red-light camera industry and its relationship with government officials.”

Otherwise, she said, municipalities can contract with private debt collectors.

“We can’t unilaterally end this program, but we can certainly end our participation in anything that would take money away from people who can least afford to pay it,” Mendoza said.

Pressure on red-light camera operators continues to mount in the General Assembly as well.

State Sen. Emil Jones III (D-Chicago) advanced Senate Bill 1297 in a Senate committee during the fall veto session. That bill calls on the Illinois Department of Transportation to study “automated traffic law enforcement systems” and report back to lawmakers “on the overall operation, usage, permit process, and regulation” of the devices.

It did not, however, receive a vote from the full chamber.

Those bills await assignment to a substantial committee in the Illinois House.