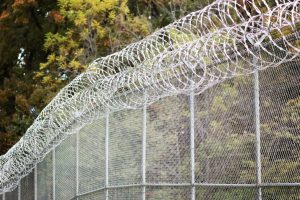 The latest data shows 82 prison staff and 45 prisoners are currently positive for COVID-19, and a total of 4,177 staff and 10,768 prisoners have tested positive since the pandemic began.

SPRINGFIELD – The Illinois Department of Corrections and a number of elderly and medically vulnerable prisoners seeking early release from state prisons due to COVID-19 reached a settlement Tuesday, March 23 in a lawsuit brought by the inmates against the department.

Under the settlement, IDOC agreed to “identify and evaluate medically vulnerable prisoners for release through legally available mechanisms.” The settlement also calls for the department to apply good behavior credits to inmates who are eligible for those credits and have at least nine months left on their sentence.

Inmates with at least nine months of their sentence remaining who are considered low-risk will receive 60 days of good behavior credit, while those considered medium-risk will be awarded 30 days credit.

The application of credits is expected to begin within the next 30 days, the court document states.

Amanda Antholt, one of the attorneys representing the prisoners, said the settlement will likely impact up to 1,200 inmates across Illinois prisons.

“What we’ve accomplished is really working with the state to make sure that they’re doing everything they can to utilize the avenues available to them, where it’s safe and appropriate to do so, to be releasing folks or to transferring them over to home detention, particularly those who are getting out soon anyway,” Antholt, who works for Equip for Equality, said in a phone interview March 23.

Medical furloughs, which Gov. J.B. Pritzker expanded under an executive order last year, are defined as a “temporary leave of absence from secure custody for limited medical purposes for offenders who, because of a medical condition, are determined to be either of limited physical mobility or terminally ill.”

IDOC spokesperson Lindsey Hess said in an email Thursday, March 24 that an accurate number of individuals receiving the credit cannot be determined until individual reviews are done to ensure eligibility.

Hess said the department “has consistently, pursuant to Illinois statute, reviewed its population for eligibility to be granted 180 days or less of earned discretionary sentencing credit,” or good behavior credits.

“Since the March 9, 2020 Gubernatorial Disaster Proclamation based on this unprecedented COVID-19 pandemic, the Department has been prioritizing these eligibility reviews in an effort to increase the availability of space for quarantining or isolating the offender population in accordance with CDC guidelines and limit the number of men and women who may be exposed, but always with a view to ensure public safety,” Hess said in an emailed statement.
She said 2,472 inmates have been released from IDOC custody between March 1, 2020 and March 1, 2021 with good behavior credits.

The settlement arises out of the lawsuit filed last April on behalf of medically vulnerable and elderly prisoners, by a group of public interest lawyers, including attorneys from Equip for Equality, Loevy & Loevy law firm, the Uptown People’s Law Center, and the Illinois Prison Project.

The federal lawsuit asked the court to issue an emergency order that would have authorized the release of roughly 13,000 state prisoners. The lawsuit argued that keeping medically vulnerable prisoners who are at risk of contracting COVID-19 confined in close proximity to one another violated their constitutional rights, including the right protecting individuals from cruel and unusual punishment.

“[The prisoners] have provided no convincing reason for a federal court to intrude here and now — either to issue a blanket order for the release of thousands of inmates or to superimpose a court-mandated and court-superintended process on the mechanisms currently in place to determine which IDOC inmates can and should be safely removed from prison facilities at this time,” the judge wrote in his 48-page opinion.

Releasing inmates “requires a process that gives close attention to detail, for the safety of each inmate, his or her family, and the community at large demands a sensible and individualized release plan — especially during a pandemic,” the opinion continued.

Antholt said the settlement also ensures IDOC is providing training to all the relevant facilities’ staff about how to accommodate the needs of vulnerable prisoners.

“Obviously this is training that we wish would have been done a year ago, but at least they’re doing it now,” she said.

The latest IDOC data shows 82 prison staff and 45 prisoners are currently positive for COVID-19, and a total of 4,177 staff and 10,768 prisoners have tested positive since the pandemic began.

There have been 87 Illinois prisoner deaths due to COVID, according to the Marshall Project’s database.

A spokesperson for the Illinois Department of Corrections did not respond to a request for comment about the settlement.

Editor’s note: This story has been updated with a comment from the Illinois Department of Corrections.