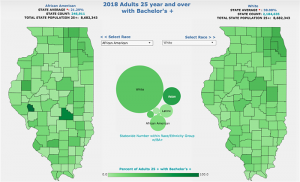 A graphic from the Illinois Board of Higher Education website, https://www.ibhe.org/equity.html, depicts the gap in attainment of a bachelor’s degree or further education between African American and White residents. The percentage of Black adults over 25 with a bachelor’s degree or higher is significantly smaller. (Credit IBHE.org)

SPRINGFIELD – The Illinois Board of Higher Education is preparing a strategic plan to make higher education in the state more equitable, which will be released for public scrutiny sometime between late December and early March of next year.

To inform the process—which starts in September— of crafting that plan, the board begins each meeting with presentations on equity. The first of these presentations was Tuesday, with the topic being ethnic and racial equity in higher education.

“The story I will lay out today is not an uplifting one,” IBHE Executive Director Ginger Ostro said at the start of her presentation. “On nearly every measure, we are failing our African American students.”

Based on data from the 2013 and 2018 American Community Survey,  Black and Latino residents lag far behind their white peers in enrollment, retention, progression, placement in developmental education, access to early college, completion, attainment and earnings after college.

While enrollment among all racial groups dropped between 2013 and 2018, the drop was steeper for Black and Latino residents.

“As we look again over time, the proportion of the student population that is African American has declined every year,” Ostro said.

According to Ostro, the disparity starts even earlier, before students even set foot on a college campus.

“African American students are missing out on opportunities to earn credits or get exposure to college level work. And research shows that early college experience leads to higher levels of college enrollment and completion,” she said.

The most recent graduating class of Illinois high school seniors was 15.4 percent Black, 24.4 percent Latino and 51.6 percent white. Yet in high school programs that give students a chance to get college credit early, Black students were heavily underrepresented.

In Advanced Placement courses – high school classes that give college credits – white and Latino students were participants proportional to their graduating class, while Black students made up only 9 percent of AP students.

In dual enrollment courses – college courses that high schoolers can take to receive credit at community colleges or equivalent institutions – both Black and Latino students were heavily underrepresented, making up 9.2 and 17.7 percent of participants, respectively. White students were nearly 65 percent.

A number of factors could cause these outcomes, like schools that serve predominantly African American and Latino students not having AP and dual enrollment courses available.

White college graduates on average made almost $5,000 more annually one year after graduating with a bachelor’s degree than their Black peers with a similar level of education. After three years, the disparity grew larger.

A gap also exists between white and Latino college graduates, but it’s significantly smaller on average, never reaching more than $2,000.

“These gaps are well above the national average,” Kayla Elliott, a senior policy analyst for higher education at the Education Trust said at the meeting. “We know that for people of color, for Black Americans in particular, attending college and earning a degree from a public institution might be the most promising pathway towards economic security and upward social mobility.”

According to Elliott, race-conscious policies, or those that take race and ethnicity into account, can help alleviate equity gaps. Policies that substitute other demographics such as income and zip code for race have not been shown to close gaps in opportunity and outcome for Black and Latino students, she said.

In 2008, Advance Illinois, an independent public education policy organization, set the “60 by 25” goal: for 60 percent of adults in the state to have a post-secondary education degree or equivalent credential by 2025. While the state is not on track to meet that goal, IBHE hopes with its upcoming strategic plan that Illinois will make great strides towards equity and higher-education attainment for all residents by 2025.

According to Ostro, future presentations at IBHE board meetings will look at gender, income and geographic equity gaps.