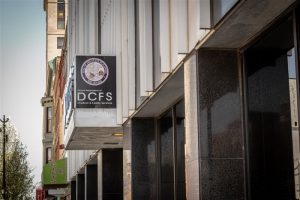 For the fourth time in six weeks, a Cook County juvenile court judge has held Illinois Department of Children and Family Services Director Marc Smith in contempt for failing to move a minor into an appropriate placement.

“This really underscores the level of crisis here,” said Cook County Public Guardian Charles Golbert. “They knew about this hearing and even with the hammer of a contempt of court citation over their heads, they were unable to find an appropriate placement for this child.”

Golbert’s office provides legal representation to thousands of abused and neglected children in Cook County who are wards of the court.

There are currently 43 children in the custody of DCFS who are in placements beyond medical necessity, according to DCFS.

“The Department of Children and Family Services is dedicated to keeping children safe and strengthening families,” DCFS spokesman William McCaffrey said in an email. “We are working aggressively addressing the decades-long challenge of a lack of community resources and facilities for children with complex behavioral health needs, which has been exacerbated by an increased demand in social services in recent years.”

The latest case involves a 16-year-old girl who came into the state’s care on Sept. 28. The girl was medically approved for discharge from a locked psychiatric hospital but remained in the hospital for two more months while DCFS tried to find a placement for her, Golbert said.

The girl was discharged from the psychiatric hospital on Nov. 18, but has changed placements 24 times since then, Golbert said. A chart with her placements that was used as an exhibit in court showed the teen was moved up to six times in a week.

“This poor kid was bounced around all over,” he said.

DCFS first recommended a specialized foster home for the girl based on an October evaluation, Golbert said, but then reevaluated her in December and then recommended residential care.

On Jan. 6, a Cook County juvenile court judge ordered DCFS to place the girl in residential care in compliance with their own recommendation. Six weeks later, the girl was still waiting for that placement.

On Thursday, Feb. 17, a judge once again signed a contempt citation against Smith. The girl is currently in a psychiatric hospital.

This is the fourth time in six weeks that Smith has been found in contempt.

“I don’t think you will ever find this situation happening anywhere across the country,” Golbert said.

“It is clear that whatever you and director Smith are doing at DCFS is not working,” Durkin’s letter said. “Your administration’s lack of transparency on this issue is beyond startling and the nonchalant attitude you have taken on these very serious contempt of court orders is unacceptable. My question to you is what are you doing to protect the children of this state who have to depend on your administration for their wellbeing?”

DCFS has faced scrutiny from the legislature in recent weeks for the death of a caseworker, the death of a child after abuse allegations were reported, and the contempt citations filed against Smith.

In late December, the body of Damari Perry, 6, was found abandoned and burned in Gary, Indiana. A medical examiner ruled the boy died from hypothermia. His mother and siblings said Damari was punished with a cold shower but then vomited and became unresponsive. They have been charged with the boy’s death.

Days later, DCFS child protection investigator Deidre Silas, who had worked for the department for six months, was murdered during a welfare check of six children at a Thayer home in Sangamon County. She was beaten and stabbed.

In mid-January, a Cook County judge found Smith in contempt and ordered a $1,000-a-day fine for as long as he left children in placements that were inappropriate, including in locked psychiatric units and at the Southern Thirty Adolescent Center, or STAC, an emergency center in Mount Vernon meant to hold children for less than 30 days.

The three contempt citations were purged and the fines waived after the children were moved to the recommended placements.

During a hearing in front of the House Human Services Appropriations Committee, Smith told legislators that DCFS is working with private agencies to place DCFS wards, but those agencies are facing hiring struggles and trying to reconstitute services that were dismantled by the state budget impasse during the previous administration.

“That does not mean on any level that we do not have to have aggressive, hard-working people working at all hours of the day, every day, trying to place that child,” Smith told the legislators during that hearing. “For me, it’s so important and I would resign from this position immediately if I did not feel and act in a way that these have to be cared for and placed immediately.”

Smith went on to tell legislators that the number of children who are held beyond medical necessity is a small portion of the 21,000 children under DCFS custody.

Of the 43 children being held beyond medical necessity, DCFS estimated that about 25 percent are in Cook County with the rest being spread around the state.