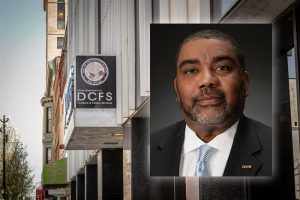 SPRINGFIELD – Department of Children and Family Services Director Marc Smith has faced nine cases of contempt of court in recent weeks for failing to comply with a judge’s order to place the state’s most vulnerable children in an appropriate setting.

In a recent interview with Capitol News Illinois, he outlined the scope of the problem and why it’s not new or easy to solve.

The contempt charges center around children in state care that are held in psychiatric or other facilities beyond medical necessity. The children represent a small but challenging population for the child protection agency, Smith said. Of the 20,000 children in the care of DCFS, Smith said about 0.2 percent qualify as being held beyond medical necessity — often referred to as “stuck kids.”

Children who are psychiatrically hospitalized are in secure facilities, behind locked doors for most of the day, going outside for an hour a day. Most do not receive schooling and cannot participate in extra-curricular activities.

The difficulties in placing the children in more appropriate facilities, Smith said, have been compounded by prolonged state disinvestment in DCFS, the COVID-19 pandemic, and the deficiencies at other state agencies.

Gov. JB Pritzker has repeatedly pointed to the fact that 500 placements for high-need children were erased amid a two-year budget impasse under former Republican Gov. Bruce Rauner. That’s partially because DCFS supportive services are run through private sector groups and non-profits, which cut specialized programs, including programs for mentally ill or developmentally delayed children, in response to funding uncertainty.

Smith took over at DCFS in 2019 at a time when the agency was trying to convince the outside groups to consider reinvesting in Illinois and adding programs to support children and their families. 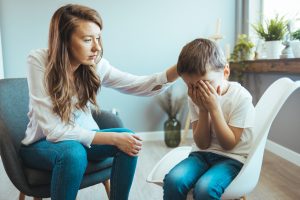 Studies show children with special needs and their parents are generally experiencing higher rates of stress, depression and anxiety coming out of the COVID-19 pandemic.

Then, the pandemic hit, increasing the number of children in need of specialized care and further straining the system.

A study by the Kaiser Family Foundation found that COVID-19 impacted disabled children by keeping them out of congregate settings, such as school. Students with disabilities may not have had access to necessary supports during the pandemic, leading to disruption in their behavioral therapies and education.

And their parents, who, the data show, are generally experiencing higher rates of stress, depression and anxiety than other parents, were dealing with providing around-the-clock care for their children amid other pandemic stressors.

Despite those increases, the state was still behind in the supportive services available for children ready to be discharged from hospitals to residential care or family-like settings.

As a result, Smith said, children lingered in these settings rather than time-limited, treatment-intensive intervention programs that would allow them to stabilize then return to their families with needed supports and services.

Even with recent budget increases — Pritzker and lawmakers have increased the DCFS budget by at least $100 million each year since 2019, including by $250 million this year – the effort to build back the lost placements has been slower than the decline. From 2019 to 2021, DCFS added 90 specialized placements. So far this year, DCFS added 37 more. Within the next 60 days, 24 more placements will be available, Smith said.

“We are working very hard to identify qualified residential treatment providers, increasing the skill set of providers and making sure that there is enhanced case management and educational and development areas for these children,” Smith said.

As well, Smith said, more than one-third of these children come into care because their parents are unable to find supportive services for the children to come home. These are parents that want to care for their child, are not accused of abuse, but lack the help they need to provide that care after their children are discharged from a medical facility.

“As a parent, it would be heartbreaking to surrender your child to a government agency because you could not provide appropriate care,” Smith said.

That means the state’s approach must go beyond DCFS, he said.

A group from DCFS, the State Board of Education and the departments of Human Services, Healthcare and Family Services, and Juvenile Justice are studying ways to improve children’s behavioral health through interagency communication, creating new programs and improving existing ones.

In October, Illinois was approved for participation in a new federal program through the U.S. Department of Health and Human Services’ Children’s Bureau. The Family First Title IV-E Prevention Program was created by the Federal Bipartisan Budget Act of 2018. Illinois is among 17 states and the District of Columbia to submit its plan in compliance with the act and have it approved.

Smith said it will increase Illinois’ funding and flexibility to operate programs aimed at strengthening and supporting families to keep children safely at home and out of foster care.

The five-year plan, developed with DCFS and 200 service providers, will create programs for parenting skills, drug abuse treatment and mental health services, among others. The goal is to keep children out of foster care while improving the quality of care and shortening the amount of time spent in state care.

“It will allow us to reimagine child welfare in Illinois,” Smith said.

The nine contempt charges from Cook County Judge Patrick T. Murphy, who presides over the “stuck kids” docket, have drawn headlines and scrutiny, including calls for audits of DCFS and for Smith’s ouster.

Agency sources, however, said Smith’s departure may undermine private agencies’ confidence at a time when the state is engaged in negotiations for increased programing.

While Smith has faced a $1,000 daily fine for each day a child remains locked in an improper facility, an appellate court has stayed those citations and fines. It’s been over two weeks since Smith has received a new contempt citation.

The “stuck kids” docket, meanwhile, continues to meet every Thursday in Cook County Court for children in the state’s custody who are in psychiatric facilities for weeks, months and, for at least one child, for almost a year after doctors discharged them.

Charles Golbert, Cook County’s Public Guardian, is one of the state’s most vocal critics of DCFS. He’s given voice to the extreme placement shortage crisis. Last year, DCFS forced 356 of its children to languish in locked psychiatric hospitals unnecessarily for an average of 55 days each, totaling more than 50 years of children’s lives in just a year.