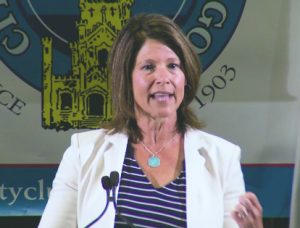 U.S. Rep. Cheri Bustos (D-17th) talks to members of the City Club of Chicago during a May 6 breakfast. Bustos said the top of Democrats’ 2020 ticket is vital to her post as Democratic Congressional Campaign Committee chair. (City Club photo)

Cheri Bustos has changed a street lamp, repaired a barge and fixed a car.

“When you are working shoulder to shoulder with people who do hard work every single day, they do not obsess about the same kind of things that are obsessed on in Washington D.C.,” Bustos told members of the City Club of Chicago at a May 6 breakfast.

The Moline Democrat, who is just the second Illinois resident to chair the Democratic Congressional Campaign Committee (following Chicago Mayor Rahm Emanuel), said people in her mostly rural district are most concerned about health care costs and the state’s infrastructure.

“No one brings up the Mueller report,” Bustos said.

She said that is partially where the divide happens between the hype and what really is taking place in Washington D.C.

Bustos said while the Robert Mueller report on possible collusion between President Donald Trump’s campaign and Russia grabs the headlines, no one knows about the 25 hearings the U.S. House has had on health care or the 20 hearings it has had regarding infrastructure

Now having the job of protecting and expanding the Democratic majority in the U.S. House of Representatives, Bustos said she wants candidates to hear the experiences and concerns of people through job shadowing, town halls and other grassroots efforts.

While not ready to divulge her choice for the top of the Democratic ticket in 2020, the representative knows the importance of that person in helping secure and enhance what she called a “fragile” majority in the House. She said Democrats have a 17-vote majority in the House and there will be 33 battleground races for congressional seats in 2020.

“I do know that whoever is at the top of the ticket on the Democratic side matters a lot on how well I can do my job protecting the people who are in Congress now in these very, very tough districts and making any kind of gains,” Bustos said.

She said someone at the top of the ticket who relates to people and their struggles is vital for Democrats moving forward.

Bustos said she personally went to all 16 homes in Hamlet during her 17th District campaigning to get a sense of what was on people’s minds. While Bustos was walking along a side street in the town of 48 people, a woman came up on her John Deere riding tractor asking if Bustos would join her, her husband and their adult son for a glass of Guinness to toast U.S. Sen. John McCain who had just died.

“I want to make sure whosoever running has those interactions with people and not just on a phony level,” Bustos said. “You see, there’s plenty of phony-level politicians. You’ve got to get to know people and their struggles.”

Bustos, now in her fourth term, said that is why on any given Saturday she will be walking the aisles of a grocery store in her region listening and learning from area families. She said her “Supermarket Saturdays” give her a chance to hear the triumphs and challenges facing families in the region.

Bustos runs a candidate boot camp called “Build the Bench,” which has been billed as a national model for candidate training programs.

She said slating congressional candidates comes down to a numbers game.

“It’s a science as much as an art,” Bustos said.

She said the best Democrat in the world could go up against John Shimkus in the 15th Congressional District and the Democrat is going to lose.

She pointed to Brendan Kelly, director of the Illinois State Police, who ran unsuccessfully in the 12th Congressional District as an example. Bustos said the former St. Clair County state’s attorney was a “near-perfect candidate who couldn’t win that.”

Bustos said Kelly is Catholic, has a military background, is church-going, a father and a prosecutor, “like a perfect profile for that district and couldn’t win it.”