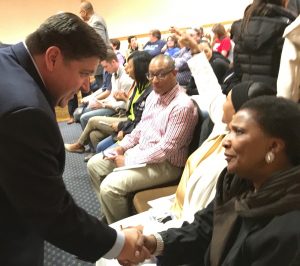 A full 10 months before next spring’s Democratic Gubernatorial primary, three of the six declared candidates were present at a forum in west suburban Hillside hosted by local township committeemen.

At the start of what promises to be the longest and most expensive gubernatorial election campaigns in Illinois history, the three candidates came out swinging against the policies of both Illinois Gov. Bruce Rauner and President Donald Trump.

The fourth invited candidate, Christopher Kennedy, a philanthropist, former Merchandise Mart CEO and former chairman of the University of Illinois Board of Trustees, was unable to attend Sunday’s forum because he was in Boston at a ceremony honoring former president Barack Obama.

Two other declared candidates were not invited to the forum: Alex Paterakis, a 29-year-old civil engineer and business owner, and Bob Daiber, the Madison County Regional Superintendent of Schools.

Rauner and Trump were red meat dangled before the audience during opening remarks by State Sen. Don Harmon (D-Oak Park) and Cook County Recorder of Deeds Karen Yarbrough, and the audience broke into robust applause whenever a candidate mentioned defeating Rauner.

Pritzker, Pawar and Biss were all clearly intent on tying Rauner to the unpopular president both politically and philosophically, and all agreed on the need to both defeat Rauner and oppose Trump’s agenda at the state level in every manner possible. 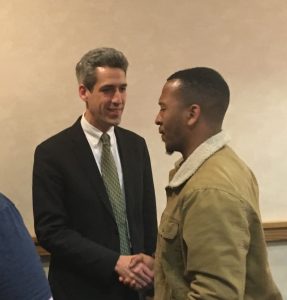 Biss called Illinois and other states “the first line of defense against Trump(’s)” executive orders undermining those individual rights and the programs designed to protect those rights.

Biss also criticized the status quo in Illinois in which, he said, a small number of officials “are making decisions about us, without us.”

“Are you ready for a fight?” Pritzker said. “Because we’re going to have to fight Bruce Rauner and Donald Trump. Everything we care about is under siege by Donald Trump and Bruce Rauner.”

Pawar referred to the the governing model pursued by Rauner and Trump as a plutocracy, one in which government greatly favors the wealthy while ignoring the needs of the majority of citizens.

“We must invest in one another,” Pawar said.

The three were nearly inseparable on social justice issues, arguing for greater equity for all people, including women’s equal rights, immigrants rights and abortion rights.

All agreed that public pensions were contractually guaranteed and could not be reduced, and  that additional revenues were needed if the state was ever to tackle its massive pension short funding and to balance its budget.

They also agreed that funding public schools primarily through property taxes was not working and was inequitable.

A progressive tax code must be part of the solution to increase revenues, all agreed.

“Only four states have a flat tax,” said Biss. “We are an anomaly.”

In one of the more specific and noteworthy proposals of the evening, Biss proposed taxing financial transactions.

Several of the questions from the majority African-American audience focused on economic justice and empowerment. 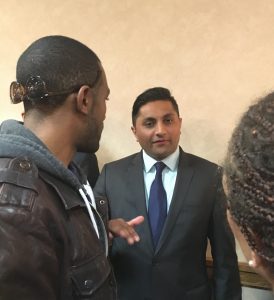 Besides shifting the primary funding of schools from property taxes to the state, all three men reiterated their call for a renewed focus on the general welfare over benefitting the privileged few.

In particular, he called for the establishment of a Small Business Fund that not only made capital available to minority districts, but also technical support and mentoring, to allow, he said,  “equity and profits to stay in the community.”

Said Pawar, “You start with equitable investment in working families.”

Biss said minority communities have suffered from not just years, “but generations of disinvestment,” and added, “We have a responsibility to act like we see potential in every neighborhood.”

In their final comments. all three reiterated points and phrases that are all but certain to become poster phrases during their campaigns.

Pawar repeated his call for a “21st Century New Deal,” between state government and the people of Illinois, saying Rauner “doesn’t care about basic care and services.”

Biss said the 2018 election “is not just about beating Bruce Rauner,” but rather, “what we need and not what a few people want.”

Pritzker, who stressed his 20-year history of progressive activism, repeated what is likely to be a key phrase throughout his primary campaign, saying, “Are you ready for the fight?”