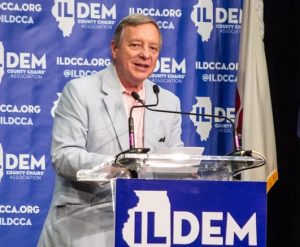 The “American Rescue Plan” passed the U.S. House on Wednesday, March 10 on a 220-211 vote, largely along party lines. No Republicans voted in favor of the bill while only one Democrat voted against it. The White House has indicated that Biden plans to sign the bill Friday.

The bill includes direct payments of up to $1,400 for most Americans, which people should receive by the end of the month. But it also includes aid for state and local governments that suffered massive revenue losses after much of the U.S. economy was shut down last spring due to the COVID-19 pandemic.

According to U.S. Sens. Dick Durbin and Tammy Duckworth, both Democrats, the bill will send $7.5 billion directly to the state of Illinois. It also provides another $5.5 billion for city and county governments in the state as well as another $5 billion for Illinois K-12 schools.

“I am grateful to Senators Durbin, Duckworth, and our congressional delegation for making sure Congress took bold, swift action,” Illinois House Speaker Emanuel “Chris” Welch, D-Hillside, said in a statement. “Once guidelines are issued by federal authorities, I look forward to working with the Pritzker administration and our budget leaders on how to best appropriate these funds so they meet the needs of our most vulnerable communities. While I know the road to recovery will not be easy, this bill gives us the funds necessary to simultaneously address this health and economic crisis.”

The current fiscal year’s budget, which lawmakers passed in May, was based on the assumption that Congress would pass a relief package for state and local governments and that Illinois voters in November would approve Gov. J.B. Pritzker’s proposed constitutional amendment to allow for a graduated income tax.

But the tax amendment failed at the polls, and congressional Republicans, who held a majority in the U.S. Senate until the 2020 elections, firmly opposed providing fiscal aid to state and local governments. Those factors combined put the state’s budget out of balance by roughly $4.9 billion.

The state has since closed that gap, in part by borrowing $2 billion from the Federal Reserve in December and in part because last year’s tax filing deadline was pushed back from April 15 to July 15. But the state’s economy has also recovered faster than expected and on Tuesday, the Commission on Government Forecasting and Accountability revised its estimate of base revenues upward by nearly $2.9 billion, enough to close what had been a projected deficit.

“This financial relief is needed in Illinois to pay back billions of dollars we borrowed from the Federal Reserve that allowed us to cover the state’s health care bills as we fight our way through this pandemic,” Illinois Comptroller Susana Mendoza said in a statement, noting that the state still faces considerable economic challenges due to the pandemic.

“Restaurants and hotels were closed and not paying sales taxes,” she added. “Employees were laid off. Not only were they not earning a paycheck and not paying personal income taxes to the state, people who’d never sought unemployment benefits had to file for the first time and avail themselves of other state services. The state had less money coming in and more demand for services. It was a double whammy to the people and to the state budget, and it will take years to recover.”

“The funds Illinois is receiving will help us distribute vaccines, support local health departments, safely reopen schools and provide direct relief to the hardest hit families,” he said in a statement. “This package gets us one step closer to ending the pandemic and addressing the economic pain it caused.”

Republicans in Illinois’ congressional delegation, however, remained critical of the package. U.S. Rep. Mike Bost of Murphysboro issued a statement saying Democrats should have worked harder to find bipartisan consensus.

“Up to this point, every piece of COVID-19 relief legislation that has been signed into law has been bipartisan, and I have supported all five,” he said. “But this time around, (U.S. House Speaker) Nancy Pelosi pushed forward on her own bill without any input from congressional Republicans.”